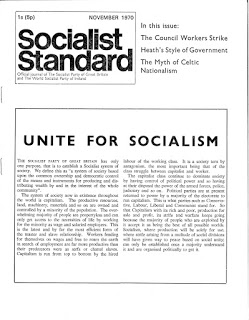 From the November 1970 issue of the Socialist Standard

During the six years of the 1964-70 Labour government, two developments were going on in the field of economic theory; on the one side confidence in a government’s ability to “manage the economy” was being undermined by the series of crises and the rise of prices and unemployment; on the other a big offensive was being mounted by monetary economists against the Keynesian ideas on which the Labour government’s policies were based. The two trends came together in the declaration made on 19 May 1969 by Roy Jenkins, Labour’s Chancellor of the Exchequer, that his priority was not expansion of production and employment, as his supporters would have wished, but dealing with the problem of “too much money” in the economy.

Prominent among the monetary school is Professor Milton Friedman of Chicago University, whose lecture, “The Counter-Revolution of Monetary Theory”, was reproduced in the Financial Times  (7 September). It should be noted that Friedman said he was attacking Keynes’ followers not Keynes himself. Indeed he claimed that Keynes, if still alive, would, in present circumstances, be in the forefront of the counter-revolution.

Among the many aspects dealt with by Friedman the two most interesting were his treatment of inflation and his own idea of how a government should try to manage capitalism.

On the first he declared:


“Inflation is always and everywhere a monetary phenomenon – in the sense that it is and can be produced only by a more rapid increase in the quantity of money than in output.”

At first glance it may seem that Friedman was merely restating the view held in the past by economists as diverse in their approach as Marx, Cannan and Keynes, that if an inconvertible currency (such as exists now) is issued in excessive amounts this causes a proportionate rise in the general price level. There is however a variation of terms that should be noted. These three economists were talking specifically of currency (notes and coin) while Friedman was talking of currency plus bank deposits. (Current use of the term “money”is so variously defined that the government central statistical office now has three different calculations of the money supply).

In practice no doubt the Friedman “money” view of inflation comes back roughly to the currency view because any policy of controlling “money supply” would in the last resort entail also control of the currency issue. Most economists follow Friedman in including some or all of bank deposits in their conception but among those who after the war continued to deal with inflation specifically in terms of currency was Sir Arnold Plant, Professor of Commerce in the University of London. He declared that “all our troubles arising from the present inflationary position would cease as soon as a British government decided to accept the full responsibility of their position as the sole controller of currency issues”. He wanted an absolute ceiling to be placed on the total currency issue (The Times, 1 June 1956).

In order to understand the attitudes of Friedman and Keynes (and Marx) it is essential to separate the question of inflation (currency depreciation) from the question of the possibility of managing capitalism. Keynes was not an advocate of currency depreciation for its own sake, though he did rely, as a method of handling certain situations, on his belief that workers who would strike against a reduction of money wages could be induced to accept a fall of real wages through a rise of prices (The General Theory, p.9).

Keynes’proposition was that no control of the currency issue was necessary because if the monetary authorities looked after bank lending (“the creation of credit”) the creation of currency could be left to follow suit (Tract on Monetary Reform, p.184).

When Keynes declared his belief that formal control of the currency issue was unnecessary Professor Cannan immediately raised the alarm. He said that experience showed that unless there was some form of control governments would always succumb to the temptation to depreciate the currency, with its consequent rise of prices. In fact currency in the hands of the public has increased from £449m in June 1938 to £3,107m in June 1970. Such a rate of increase was never intended or anticipated by Keynes. Friedman is now saying that some control is necessary. He wants the increase to be limited to a steady 4 or 5 per cent a year.


“A steady rate of monetary growth at a moderate level can provide a framework under which you can have little inflation and much growth. It will not produce heaven on earth. It will make an important contribution to a stable economic society.”

If Friedman’s lecture is compared with the 1944 White Paper Employment Policy, which was the agreed three-party statement on how Keynesian doctrines were to be applied after the war, it will be seen that Friedman’s other main criticism was of the belief that interest rates could be kept down by government policy and that this could be an effective instrument for controlling economic affairs. Bank rate under the Wilson government rose to the highest level for a century and Friedman argues that the excessive rate of growth of the money supply is a contributory factor in high interest rates.

That 1944 statement showed how the government would iron out the ups and downs of overexpansion and depression by varying interest rates, by alternately increasing and decreasing government and private capital investment and by increasing and decreasing the market for consumer goods, and at the same time aim at “work for all“, stable prices and continual expansion of production and a rising standard of living. It has failed in most of its objectives.

What are the prospects that Friedman will do any better? He is of course more moderate in his claims. He appears to think that under his proposal British experience will come more into line with American. It would seem that he is not expecting much; indeed it may well be he expects the already rising unemployment in Britain to reach the higher level that has prevailed in America in recent years.

There is no reason at all to suppose that his moderate and controlled inflation will get rid of the cycle of expansions, crises and recessions than did the more rapid inflation of post-war Britain, or the long period without inflation in the 19th century.

Marx never supposed that capitalism could be made to work smoothly and neither Keynes nor Friedman has shown how capitalism can do without unemployment to provide an industrial reserve army and keep wages down to a level profitable to the capitalist. It is true that post-war governments thought they had found a substitute in the form of an incomes policy and wage restraint but it came up against working class resistance they never expected.

Incidentally in all the plausible plans of the 1944 statement there was not a word about having to include such a policy.