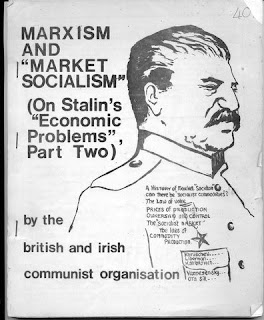 Pamphlet Review from the November 1970 issue of the Socialist Standard

“Market Socialism” is of course a contradiction in terms since the establishment of the common ownership and democratic social control of the means of production necessarily involves the abolition of the market. It is used here by a group of Maoists (they say that soon after the death of Stalin in 1953 the Russian government began a policy of “restoring capitalism” in Russia) in their criticism of the current economic doctrines of the Russian ruling class. They too see this term as contradictory but from a different angle since they accept Lenin’s false distinction between “socialism” and “communism”. Nevertheless this is an interesting pamphlet which makes some pertinent points.

“Marxist-Leninist literature”, a Russian economist Lev Leontyev has written, “has proved as entirely groundless the idea that Marx and Engels, and Lenin, pictured socialism as a natural economy without commodity-money relations”. To see why this is a distortion of Marxism we must know something of what Marx said.

Marx set out to examine how capitalism worked. Capitalism, he showed, was the most developed form of commodity production, a commodity being an article of wealth produced by separate, competing enterprises for sale on the market. The existence of commodity-production implies the existence also of private property, of private owners of commodities who buy and sell them. What prevents a complete breakdown of this unorganised system of production is the fact that commodities exchange in definite proportions depending on their value (or the amount of socially necessary labour used in producing them). It is through the impersonal workings of the market, called by Marx “the law of value”, that production is regulated under capitalism.

Socialism, by establishing the common ownership of all the means of production, brings commodity-production to an end. No longer is wealth produced by numerous separate enterprises all competing to sell their goods on the market. The law of value ceases to operate. Instead there is the planned production of useful things under the democratic control of society. This was the view of Marx and Engels and is the view of the Socialist Party of Great Britain. It was inherited also by the Bolsheviks who seized power in Russia in 1917. They proclaimed their ultimate aim as the abolition of the market and money and explained the persistence of commodity production after 1917 as a survival of capitalism which would gradually be eliminated. This is what the classic Bolshevik textbook of 1919 The ABC of Communism argues; it is also what the Irish Communist Organisation describe as “orthodox Marxism”.

In 1936 Stalin declared that Socialism had been established in Russia, despite the continued existence of commodity-production. This glaring contradiction was not resolved until 1943 when an article on “Teaching Economics in the Soviet Union” appeared in a leading Russian journal. This simply denied that Socialism involved the abolition of commodity-production and said that the law of value continued to operate under Socialism though, instead of acting blindly as under capitalism, it was consciously applied by the State. This line of thought has led today to Russian economists (just like their colleagues in the West) defending the market, and even rent, interest and profit as useful economic weapons. All this is traced and discussed in detail in this pamphlet.

In wishing to absolve Stalin from any blame for this distortion, the ICO is in a curious position. They say that the 1943 article “clearly represents revisionism at a high level of development and in an influential position in the CPSU” and imply that Stalin would not have endorsed it. This is most unlikely. So important an article could not have been written without Stalin’s knowledge or approval. Indeed it probably arose from the meeting Stalin had with leading Russian economists in 1941 which is mentioned in passing by one of the Russians quoted in this pamphlet. All the ICO have to go on to argue that Stalin held a view similar to the early Bolsheviks is some remarks in his Economic Problems of Socialism in the USSR, written in 1952.

It is odd that this pamphlet should be chosen as an example of the orthodox Marxist view. For it contains a very significant distortion of Marx’s view ― it argues that there will be “objective economic laws” under Socialism. An objective law is one that operates independently of the will of man. Natural laws are thus objective and so is the way capitalism works or what Marx called its laws of motion. A moment’s thought will show that there can be no such economic laws in a socialist society. For Socialism establishes full social control over the use of society’s productive resources. The production and distribution of wealth becomes purely a technical and administrative matter carried out in accordance with plans worked out and consciously implemented by human beings. Under these circumstances to talk of “objective economic laws” is nonsense. But Stalin was insistent on this point. “The laws of motion of the political economy of Socialism” he wrote, “are a reflection in the minds of men of objective laws existing outside of us”. But men could, he went on, discover what these laws were and “utilise them in the interests of society”.

In proclaiming that objective economic laws existed which could be controlled by the State in the interests of society, Stalin was paving the way for the current Russian argument that there is nothing as such wrong with commodity-production or money or the market or profits as long as they are properly controlled and not allowed to work blindly. This of course is the old impossible dream of capitalism planned to work for the good of all.

In a sense Stalin was right. The Russian economy has always been subject to economic forces that operate independently of men’s will. But that was because it is not, and never has been, socialist but a form of state capitalism.

The cover accompanying the review is actually from the 1971 reprint/revision - ho, ho, ho - as I couldn't find the original cover anywhere on the t'internet.