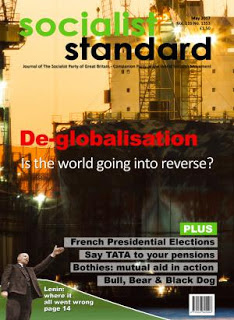 From the May 2017 issue of the Socialist Standard


In March (February under the old Russian calendar) the Tsar was overthrown. The Socialist Standard saw it as a ‘bourgeois revolution’:

The outstanding feature of the past month in the domain of public affairs is undoubtedly the “Russian Revolution”. That this is an event of some importance in the development of human society cannot be denied, but its importance is far less than, and lies mainly in an altogether different direction from that which the capitalist Press of the whole capitalist world would have us believe.


Far from it heralding the dawn of freedom in Russia, it is simply the completion of the emancipation of the capitalist class in Russia which started in the “emancipation” of the serfs some seventy years ago – in order that they might become factory slaves. The revolution’s greatest importance from the working-class view-point is that it brings the workers face to face with their final exploiters.
(April 1917)

Perhaps the most unexpected of the changes has been the revolution in Russia. Information published here is small in quantity and only of such kind and character as the master class choose to let us know, hence caution is necessary before arriving at conclusions based upon such news as we have. One of the most significant features of the business is the speed and unanimity with which the several governments and other supporters of the capitalist system of society have hastened to praise the Russian revolution, and to offer their congratulations and advice particularly the latter to the Provisional Government and the Workers’ Committee. The common theme of all these messages is the need for the more vigorous prosecution on the part of Russia of the war against the Central Powers.  So far as can be judged from the news published here, the replies seem generally to be favourable to these promptings, though the repudiation by the Workers’ Committee of the idea of annexation of territory as a result of the war appears to have somewhat staggered the other parties, who are fighting only for liberty, righteousness, democracy, and freedom.

All the information available, both past and present, shows quite clearly that the upheaval in Russia is not a revolution of the working class, clearly seeing its slave position under the old order and setting to work in an organised fashion to emancipate itself.  Far from this is the truth, we are sorry to say. It is but another example of the capitalists using the discontent and numbers of the working class in Russia to sweep away the Feudal rules and restrictions so strongly symbolised in the Czar and the Council of Nobles, and to establish a system of government in line with modern capitalist needs and notions.

Email ThisBlogThis!Share to TwitterShare to FacebookShare to Pinterest
Labels: Bourgeois Revolutions, February 1917 Revolution, May 2017, R2017, Russia, Russia 1917: As We Saw It series