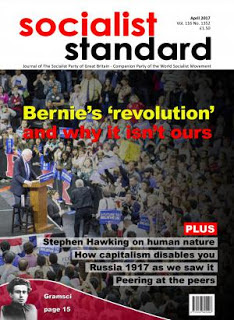 From the April 2017 issue of the Socialist Standard


A look at how capitalism treats people with disabilities.

There are various forms of disability, and plenty of room for arguments about definition. Under the Equality Act of 2010, an impairment has to be long-term (twelve months or more) and ‘substantial’ (so not trivial). The Act lays down certain ‘rights’ covering areas such as education and employment. It is all very well saying that ‘As a disabled person, you have rights to protect you from discrimination’ (gov.uk), but rights under capitalism mean very little and it is the reality of people’s situations that matters.

There are two basic approaches to characterising disability. The standard medical model sees it as something intrinsic to an individual’s condition, while the alternative social model ‘identifies systemic barriers, negative attitudes and exclusion by society (purposely or inadvertently) that mean society is the main contributory factor in disabling people’ (Wikipedia). Under the social model, an individual’s condition only leads to them being disabled under certain societally-determined circumstances, a claim which should be borne in mind in reading what follows.

There is no doubt that, in practice, people with disabilities encounter all sorts of problems and difficulties, from accommodation to work and travel. A Guardian article (8 January) gave a number of examples relating to people in their twenties and thirties. For instance, two brothers with Duchenne muscular dystrophy live with their parents and younger sisters. Under pressure from a charity, the local council is paying for personal assistants for them, but this arrangement is shared between them both, making it very difficult for them to live separate lives. One of them would like to go to university, but cannot do so, as the financial situation means his brother would have to go with him. Another woman has Ehlers-Danlos syndrome and autism, and was housed for a while in a cold and damp fifth-floor flat, where the lift hardly ever worked.

It is common to hear of those who have a choice between eating and heating, but disabled people face this even more starkly because of high heating costs. According to the charity Scope (13 January), one in four has struggled to pay their energy bills, and many are forced to use expensive pre-payment meters. People turn off their heating even though it is cold, they wear a coat indoors, they wrap themselves in a blanket, they go to bed early, and they can spend up to twice as much on energy as the average household. As the charity’s chief executive has stated, ‘Life costs more if you are disabled. Scope research shows that these costs add up to on average £550 a month, and higher energy bills play a significant part.’ Vicious cuts to benefits and arbitrary decisions to withdraw support make things even worse.

Around one-third of adults with disabilities live in low-income households, which is twice the rate for those without disabilities. This is because they are less likely to be working, with only forty percent of people who are disabled but are not lone parents being in work. Almost half the unemployed are disabled. Three and a half million adults ‘report a longstanding illness or disability which limits their activity’ (poverty.org.uk), while other sources give seven million with a disability in the UK. Such longstanding impairments are more common the less well-off people are, with poverty probably being both caused by and a cause of the disability. Globally, about one person in ten has a disability: they are disproportionately likely to be illiterate and subjected to violence.

Over the years governments have proposed various schemes to increase the number of disabled people who have jobs, but the proportion in paid work has changed very little. Furthermore, having a job does not in itself solve the problems. A blind teacher has written (Guardian, 13 February) of how he enjoyed and was good at his job, even though things like marking and keeping student records took him longer than sighted colleagues. But as the paperwork increased, he was less able to cope and became a support coordinator for disabled students. But even here the emphasis on numbers and speed and ‘efficiency’ made him appear less competent, and the workplace became ‘racked by rumour and rivalry’.

Under the law, employers have to make ‘reasonable adjustments’ to ensure that workers with disabilities are not seriously disadvantaged when doing their jobs. This can cover everything from installing ramps or letting people work on the ground floor to providing a special computer keyboard. But, as noted earlier, people with disabilities are less likely to be employed. Further, there is evidence that when in work they are more likely to suffer various kinds of ill-treatment, such as being subject to intimidating behaviour, having their opinions ignored or being treated unfairly.

Internet access is also much harder for people with disabilities. ‘According to the Office for National Statistics, in May 2015, 27% of disabled adults had never used the internet, compared to 11% of non-disabled adults’ (Guardian 29/06/15). Assistive computing can help disabled people use computers, and many do find the internet a great help, such as doing their weekly shop online rather than struggling round a supermarket. But the fact remains that a crucial part of communicating with government or local councils or support organisations is effectively barred to many people with a disability.

People with disabilities are not just workers but also consumers: their spending power is often referred to as the purple pound (compare the grey pound and the pink pound), and is supposedly worth well over two hundred billion pounds. Companies that ignore the needs of disabled customers may miss out on sales: ‘Three quarters of disabled people and their families have left a shop or business because of poor customer service or a lack of disability awareness’ (Business Disability Forum 03/05/16). M&S are one example of a company with a range of clothes for disabled children (not available in their shops, though).

While there have definitely been improvements in recent years, travel can still be a major problem too, especially, though not only, for people who use wheelchairs. The BBC’s Frank Gardner, who was paralysed in the legs when shot while reporting, has commented that he sometimes gets left on a plane for a while when an airbridge is not used (using one costs the airline money). In a well-publicised recent case, a woman was forced to wet herself on a train journey as there was no disabled toilet available.

If we look at things from the standpoint of the social model of disability, it would be reasonable to aim for a world where as few people as possible are disabled, or at least where as few as possible are disadvantaged because of any disability. This would be a world where production is keyed to fitting work to humans rather than the other way round, where those with special needs get the support they require, where goods and services truly meet human need. Despite the best efforts of many well-meaning people, a society based on the profit motive cannot be transformed into such a world.