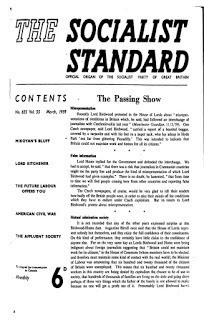 From the March 1959 issue of the Socialist Standard

Preparation and Prospects
As the year 1861 opened the future opponents of the American Civil War stood glowering at each other.

The war was only a few months away, but it was still difficult to descry any clear-cut differences between North and South. The Confederacy’s President—Jefferson Davis—had been strongly Unionist, until he saw control of the Union slipping from the South’s hands. His Vice-President —Alexander Stephens—had opposed secession right until the moment when his own State of Georgia contracted out. There was also confusion on the issue of slavery, many prominent Southerners opposing it, whilst the Lincoln Government had often slated that it had no intention of abolishing it. Perhaps the most famous Southerner to oppose slavery was General Robert E. Lee—the North actually invited him at the start of the war to take command of its forces., but he refused. Especially confused was the Northern State of Maryland, where there was much sympathy for the Confederates. Plenty of Americans thought that the seceded States had taken a perfectly legal and constitutional action and that, whatever military precautions the two sides may take, the quarrel would blow over.

Fort Sumpter Falls
The first important dispute after secession came as each side began to draw up its strength, and was about the possession of military forts and recruitment of manpower. First, the Union Government ordered all the border States to place their troops under Washington’s control. Promptly, Virginia, Arkansas, Tennessee and North Carolina joined the rebels, as a protest against this attempt at federal coercion. More ominous were the rumblings around the army forts in the Southland.

The Confederates argued that, although the forts were occupied by United States troops, the land on which they stood had only been leased to the Government. Now that the Southern States had left the Union, their occupation by Federal forces was illegal and intolerable. Interest became centred on Fort Sumpter at Charleston, which the Governor of South Carolina had been planning to take over since December, I860. Southern Congressmen warned Lincoln that any attempt to relieve Sumpter would lead to war and sure enough on January 9th, 1861, the steamer, Star of the West, sent to the fort, was fired on and forced to withdraw. An uneasy peace brooded over Fort Sumpter until April, when Confederate General Beauregard, learning of a Union convoy on the way to raise the siege, bombarded it into surrender. Although many other forts had been taken in the South, Sumpter had become an important symbol, and its fall touched off a unifying passion in the Union. It may also be said to have marked the start of the war.

Since February, the South had been seriously preparing its war effort. After Sumpter, Lincoln replied by calling for 75,000 militia, to serve for three months (later altered to three years) and announcing a blockade of every Southern port from South Carolina to Texas. On May 6th the Confederate Congress passed an Act which recognised the existence of a state of war with the Union and shots were exchanged in Virginia and at Camp Jackson, St. Louis. There had been almost a year of increasing tension and bitterness. That was at an end. Hope was finished, too. The world’s first modern war had started, with its savagery and terror.

Prospects
What were the strength, the weaknesses and prospects of either side ? The Northern population was about 22 million; the Southern between 5 and 6 million, plus about 4 million negroes. In 1860 the United States Army had numbered about 16,000; of these, the Southern States had the nucleus of an army in the forces controlled by each State. About 3 million men served in the war in the Union forces, 2 million of them 23 years old or younger—an ideal age for soldiers. On the other hand, the Confederates' smaller population forced them to conscript all men between 17 and 55. When the war opened the volunteers on both sides were numerous, but as the thing dragged on the spirit declined. In the South, poor dirt farmers joined open combat with Confederate patrols and draft officials, whilst in the North, Chicago suffered anti-conscription riots.

The South was full of hope. Although the Act of Secession had cut them off from the new lands in the West, they thought that their raw materials could be traded for manufactures from the growing capitalist powers of Europe. These manufactures, ran the optimistic argument, would compensate for the rebels’ lack of industrial power. Here lay the South’s weakness, for as the agricultural area of the United States, they had left manufacturing to the North. They had next to no factories and what they had were mainly worked by Northerners, who returned to their home States when the war started: this was disastrous to the railway repair shops. The rebels had only one works—at Tredegar, in Richmond—where they could cast a gun or make a marine engine: the States Armouries were deficient, and at the start of the war there were no powder mills. There was hardly any iron and unseasoned wood had to be used in shipbuilding. All of this meant that, among other things, the rebels would not be able to break the blockade which the Union Navy kept on its ports. It also meant that recognition of the Confederacy by the European Powers was a wild dream. But the South was blind to all this; their population may have been only a quarter that of the North, but they had plenty of men who got their living planting and hunting, who were used to horseback and hardened to a spartan outdoor life They could handle guns and, apart from a dislike of organised discipline, were ideal material for soldiers. When the time came, they were to fight hard and tenaciously. The aristocratic pretensions of the South had bred a group of accustomed leaders: men like Lee and Johnston, Stonewall Jackson and Jeb Stuart, all brilliant commanders. Yes, the South was full of hope: one rebel, they said, was worth any ten Yankees.


The Yankees
And the North? Industrially, they had it all. But they needed a machine—the sort to which the 20th century has become accustomed—to change their population of factory and merchanting workers into soldiers. It took them a few years; but in the end they did it, reaching their peak of organisation when Sherman’s troopers blasted their way across the heart of the Confederacy, like any crack Commando brigade. “The Yankees dare not fight,” said many a cocky Southerner at the war’s beginning. The next few years showed that the Yankees could not only fight—they could also march and plunder, and hound an entire army to destruction.
Jack Law.