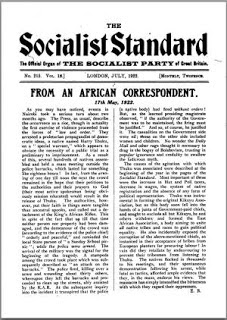 From the July 1922 issue of the Socialist Standard

The report of the I.L.P. Conference, extending over three copies of the “Labour Leader,” contains ample evidence to justify the attitude adopted towards that party by the Socialist Party of Great Britain. As they have done hitherto, when it suited their purpose, the leaders and delegates of the I.L.P. loudly proclaimed themselves Socialists and pioneers of the working-class movement, while the result of their deliberations published as a “new constitution,” brands them as confusionists.

The Chairman, Mr. R. C. Wallhead, in his opening remarks said that the Party believed and declared :—


“That for the permanent advantage and improvement of working-class conditions, it is essential for the workers to obtain power in politics. That, it believed, was the first great step towards the establishment of an organised society in which the exploitation of men. should end through the possession of the means of wealth production by the people themselves. It has persistently pursued that task until to-day it sees, largely as a result of the pioneer work it has done, the establishment of a political working-class organisation which occupies a position of second place in the country, and is accepted by the opposition leaders as the challenger for the premier place in British politics.”

The working-class organisation referred to above is the Labour Party; but how many parliamentary representatives of that Party have fought their elections on the question “of the establishment of an organised society in which the exploitation of men should end through the possession of the means of wealth production by the people themselves?” The truth is that all of them have obtained their seats in the House of Commons by keeping that position in the background, while discussing what they term questions of immediate interest, and advocating all sorts of reforms calculated to patch up capitalism and postpone the establishment of the system they profess to be out for.

Such a party may become dominant in British politics, but will always be powerless to establish Socialism because the votes of the workers are not given to them for that purpose.

It is true that the workers control in politics, in the sense that they have a majority of the total votes; but once they have voted that power, either to Coalitionists, Liberals or Labour Leaders, their control is gone, and the party they vote into office wields the full power of the State. The workers can only use the power that their number gives them when they consciously organize for a specific object and send their own representatives to the national and local assemblies for the accomplishment of that object.

In his address Mr. Wallhead told the assembled delegates that the main thought he wanted to leave with them was that he believed that in the midst of present doubts and perplexities, all the signs and indications tended to prove that the people were looking for a strong lead. If he is justified in this belief, then there are few signs of the workers controlling in politics. If the workers look for a lead, they merely look for leaders on whom to confer power. Their outlook is the same as it has been since the first Reform Bill; or since 1918, when they allowed the present Coalitionist politicians to lead them, with promises far more alluring than those the Labour Leaders dangle before them to-day.

The whole question of slavery or freedom centres around this point: will the workers continue to allow themselves to be led, or will they direct the affairs of life in their common interest, through representatives selected and appointed by themselves?

They can only do the latter w'hen they are in agreement as to the object of their political activities. The only object, correctly understood, on which all workers could agree is the Socialist object. The establishment of a system of society based on the common ownership and democratic control of all the means of wealth production. This is not the object of the I.L.P., nor is it the object of the Labour Party. The objects of the latter party are too numerous to mention; they consist chiefly of any reforms or palliatives that are likely to be popular with the workers at election times. The I.L.P. declares its objects to be:—


“The communal ownership of land and capital, and the performance, as social functions, of the processes of production, distribution and exchange.”

Such an object merely means nationalization and bureaucratic government—in practice, what we see in the Post Office—and is what the I.L.P. has always stood for, as anyone can see by a study of their leading publications. Capital is “wealth used for the production of profit,” in other words, wealth used for exploitation. It is absurd, therefore, to talk of the communal ownership of capital. Whether wealth is held and used in this way by individuals, companies, or governments, the workers are still wage- slaves because they must still sell their labour-power in order to live. The modern processes of exchange, too, is a capitalist institution and implies ownership in the means of life, either by individuals, sections, or bureaucracies ; it is, therefore, in flat contradiction to communal ownership.


If this is the object Mr. Wallhead has in view, no wonder he told the conference that:—

He (Wallhead) and the I.L.P. hold out as a promise to the workers, Bureaucratic Government. They see numbers of workers, sick of unemployment and hopeless of the fulfllment of Coalition pledges, nibbling at the bait; but Wallhead is forced to admit, even if they occupy “the premier place in British politics," that all they can do is to co-ordinate Socialist theory to immediate practical problems. Elected by workers who do not understand Socialism, leaders who do understand it could do no more. The task for every Socialist is, therefore, to help in the work of making more Socialists.

Ten years later the ILP had disaffiliated from the Labour Party, and R. C. Wallhead was one of the ILP members of Parliament who were part of the small group that left the Labour Party.