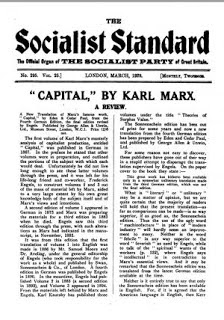 From the March 1929 issue of the Socialist Standard

The issue of the “Herald," dated January 14th, tells us that "The Labour Party never for a moment pretended that it was other than a Socialist Party.”

Let us then hear the Chairman of that party in his capacity as chairman at the recent Labour Party Conference. There, Mr. George Lansbury said: "In a most important sense Labour was not a class party. It accepted members from all classes, and the objects it sought to attain would benefit men and women of every class.” ("Daily Herald,” 2/10/28.)

Not being a class party, the Labour Party cannot obviously be a Working Class Party. Such an accommodating party can, therefore, find it easy to secure “rich friends” and finances from the only other section of society, apart from the Working Class—the Capitalists. How promising too, the prospect, that the super-tax payers, the Federation of British Industries, and the mysterious “every class,” will, according to Lansbury, all benefit equally. Even to those who possess unlimited trust such prospects will appear too rosy. To those who remember the attitude of the Labour Party towards the Working Class during the war and their readiness to use the armed force against Workers fighting to maintain their poor standard of living during their term of office, Lansbury's statement will appear the merest clap-trap. Now let us sample the Labour Party’s “Socialism,” from the same source of truth—George Lansbury. In the “Daily Herald ” (13/2/28) he said


. . .  the country had been obliged to have a little Socialism; infant welfare, maternity centres and State highways were examples of the triumph of Socialism over private enterprise. We could not live without bits of Socialism in our everyday life.

If, as Lansbury maintains, such services are Socialism, then he should surely include such pillars of British progress as our Workhouses, our Prisons and our Lunatic Asylums. In these days of mass output, he should know that it is impossible to leave such "bits of our everyday lives” to private enterprise. We could not tolerate private prisons, private workhouses, could we? We could not!! What Lansbury, in woeful ignorance, or wilful deceit, calls bits of Socialism, are merely state-owned or Government controlled departments of Capitalism. These the capitalists prefer out of the hands of private individuals for their own economy and convenience. Socialism means common ownership and democratic control of the means of life by the whole of the people. Such common ownership cannot be brought about in bits and pieces by any party or Government; it can only be established as a system of society, when there are a greater number organised for Socialism than there are opposed or apathetic to it. The Labour Party programme shows that they are prepared to take office with non-Socialist support, a fact that falsifies their claim to be a Socialist Party. In a leading article on their election prospects, the “Daily Herald” (14/1/29) said: “At present, the Socialist faith was held only by a minority—an ever-growing minority, but still a minority." The Labour Party must, therefore, if elected without the backing to proceed with Socialist reconstruction, carry on the present system. Be their intentions the most honest, they are powerless to avert or remove the evil the present system begets, notwithstanding the remedies they propose if elected. This has been proved beyond dispute in Labour-governed Australia, and the proof we have given in these columns from time to time. Lansbury’s balderdash is a reflection of the confusion that reigns among Labour Party supporters. When they, through education, become Socialist in outlook, they will elect and control Socialist delegates. They will cease to follow leaders with a political Father Christmas stocking containing something for everybody.