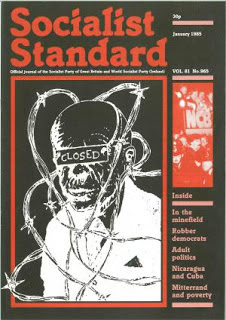 What hypocrisy! The capitalists are chastising the wage-slave "citizens" of United Kingdom (Ltd.) because the wretched proles are losing respect for Democracy. One word and a thousand deceptions: democracy — the catch-phrase of the economic dictators who monopolise the means of life.

Democracy, to make sense, means that the majority are able to make and put into effect decisions. Yes. they must act with respect for the minority who might disagree with a decision, but when all is said and done, democracy means that the majority is in a position to suit itself. (Of course, there may be different majorities on different issues, so that nobody need ever be always in the minority or always in the majority within a democratic set-up.) Democratic decisions will not always be the best ones, but they are the only alternative to various forms of dictatorship — unless, of course, we were to achieve the rather boring state of affairs where everyone agreed about everything.

Most people say they are in favour of democracy. We were brought up to be in favour of it. Ask the average worker in the office, factory or pub and he or she will tell you that we are living in a democracy. They were taught to believe that. We learnt at school about how "our" armies fought for democracy and we read in the press about how Britain's "democratic way of life" is best, just as Russian workers are indoctrinated to believe that their "People's Democracy" is best. When the nuclear bomb destroys millions of human lives (as it will if the human targets don't move) it is likely that there will be some political pervert left to climb from the rubble and proclaim that it was all in the cause of democracy.

What do the politicians and the editors and the millionaires and the titled layabouts and the bishops and the constitutional geniuses mean by democracy? Look around at their much cherished "democratic nation" and it is plain to see. For them, democracy means that a mere one per cent of the population owns more of the marketable wealth than the poorer 80 per cent added together. Three quarters of the daily newspapers are owned by just three millionaire-owned companies. And the carefully picked people who edit the press are soon given their marching orders if they fail to print what the media-owners want. Nobody elects the judges or the generals or the top dvil servants with their immense governmental power. You never see a Lord or a Duke or a Baroness standing for election on a parasites' manifesto and nor is the unelected Head of State (the Queen) appointed by a majority. The boards of the multinational companies, made up of the smallest minority of the population, exercise terrific power over workers’ lives, but they are not elected. And neither are the boards of the state-run nationalised industries. In short, the power of the few over the many is their idea of democracy. But, as we have seen, if democracy is to make sense it must mean that the majority is able to make and put into effect decisions. The majority cannot at present make or put into effect decisions about the productive and distributive machinery such as factories, farms, offices, mines and other places where wealth is created because the majority does not own or control them. Can the majority decide what the media shall do? No, the majority does not own, control or have much access to the mass media. Can the majority determine our own lives? Again, no, because the lives of the majority are at the disposal of those who buy our mental and physical energies for a wage or salary in order to make a profit out of them, and our lives must be tailored to their need for profit.

In fact the present social system (capitalism) is not and never can be properly democratic. The majority is in no position to exercise power within the system because the majority is deprived of the ownership and control of the means of life. What can be achieved, however, is the illusion of democracy. The intense concentration of wealth in the hands of the few can be called "a property-owning democracy" and the right of the richest to communicate furthest can be called "free speech". Such descriptions are as fraudulent as the Russian Empire's claim to be socialist.

The capitalist minority, whose power to legally rob the propertyless majority is dependent on the subservience of the latter, first used democratic rhetoric when it was fighting the feudal aristocracy for power. In the days before the capitalists were the ruling class they needed to make democratic noises. Many workers were taken in by the democratic posing of the would-be rulers and campaigned to allow the capitalists a say in the running of the government. Little did they realise that when the capitalists attacked aristocratic privilege because it was unrepresentative of the people they meant by "the people" only themselves. After 1832, when a large number of British capitalists obtained the vote, they were as committed as their aristocratic predecessors to keeping the wage slaves away from state power.

In the last century workers in Britain organised in order to win the vote, particularly in the great Chartist movement supported by Marx and Engels. The granting of votes to workers was resisted for years by the bosses, who hoped that they could rule forever without the wealth producers having to be involved. Modern Tories and Liberals who speak eloquently of the fine democratic traditions of Great Britain should read their history and find out that leaders of their own parties opposed votes for workers with the determination of dictators. Eventually votes were given to workers, partly out of fear of what the workers might do if they were excluded forever and partly because the shrewder of the bosses realised that bringing the exploited into the process of governing might lead workers into believing that we are in control.

Of course, it is better to have the right to vote than not (for reasons we shall explain), but workers should not regard the right to vote as proving that Britain is a democratic country. Many workers know that however they vote, whichever government is elected will end up doing essentially the same things. In short, capitalism cannot be voted into a controlled system — it is out of control and politicians, bosses and workers alike cannot do much to change its destructive course. The decisions made in the House of Commons are concerned with obeying the economic laws of capitalism, not making them. So voting and parliamentary activities are used by the robber class as a way of pretending that democratic control of society exists.

When combined with an understanding of socialist ideas the pretensions attached to the vote can be turned into a reality. When the vote is used not to elect tweedledum or tweedledee to sit in parliament and follow the dictates of the market, but to abolish the market system itself, then it can be of great value to workers. Unlike parties and sects of the Left which tell workers to ignore democracy as a capitalist con-trick, socialists say that workers can use the democratic machinery for our own ends, but that only majority class consciousness will transform voting from a process of trickery into one of liberation. It is on such a basis that the Socialist Party puts up candidates in local and national elections. And where workers have not yet achieved the right to vote it is in their interest to win it.

We are often told that the capitalists will not just sit back and allow a majority of workers to vote for socialism: to make and put into effect the revolutionary decision. No doubt there are many capitalists who share that view and think that when the time comes, as it surely will, they will be able to prevent the majority from having our way. But a conscious majority will not sit back and be dictated to by an arrogant and undemocratic minority — and if any of the dispossessed robbers are foolish enough to attempt to smash the new social order which the majority has consciously voted for it would not take very long to defeat them one way or another. So the bogus democracy of capitalism can be used by genuine democrats in order to establish a truly democratic state of affairs. Socialism and democracy are linked together, and there are no undemocratic socialists or anti-socialist advocates of social democracy.

Until workers are conscious of their real needs and their real power the bosses will continue to dictate. Periodically it is possible to see just how much contempt these democratic fakers have for majority decision-making. For example, at this year's conference of the National Union of Students, which is a fairly democratic event, the Federation of Conservative Students issued a booklet to its delegates showing them how to smash up the proceedings if the results are not going the Tory way. According to the Guardian.


It describes how to cause chaos and confusion and how to exploit disruption by shouting, heckling, throwing things and rushing the microphone. It says ‘Always be provocative. Remember, you are not here to persuade the closed-minded leftists. You are here to wind them up so much they lose control . . . ‘ (10 December 1984).

Well, that's one way to act when the majority is not on your side. And these semi-fascists dare to give trade unions advice about how to conduct strikes democratically! The fact is that these privileged defenders of exploitation and oppression have total contempt for democracy and think that they can go on pushing workers about forever. Only a class-conscious majority of democratic revolutionaries can remove the grins from their smug faces.