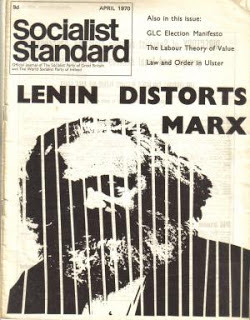 From the April 1970 issue of the Socialist Standard

Marx’s theory of the State is quite clear. When the early communist communities under which mankind originally lived broke up into class societies, a new social institution to protect the interests of the dominant class was needed. This institution was the State, which is essentially an armed centre of social control. The class that controls the Slate is thereby able to control also society, in the end by force of arms; it is the ruling class. In the course of history the State has been controlled by various classes — Ancient slaveowners, feudal barons and. now, modern capitalists. Today’s subject class, the workers, can only achieve its freedom by itself winning control of the State and using it to abolish class society by establishing the common ownership and democratic control of the means of production. With the end of classes the need for a State, as the special social organ of coercion, also disappears. The classless society of Socialism has no State, but simply a democratic administrative centre for settling social affairs.

Throughout his political life Marx insisted that the working class must capture the State before trying to establish Socialism and that Socialism would be a society without a State.

In the early days Marx expected that the workers would only be able to win power in a violent insurrection. In the 1840’s this was not an unreasonable proposition. Universal suffrage existed hardly anywhere and the insurrection — barricades, street-fighting, the seizure of public buildings — was a method used even by capitalist politicians. Marx later realised that universal suffrage was an alternative method the workers might be able to use in their struggle to win State power. In 1872 in a speech at the Hague, where the congress of the First International was being held, Marx commented that he thought the workers might be able to achieve power peacefully in America, Britain and perhaps Holland [2] —countries where they made up a majority of the voters. In 1880 a French Workers’ Party was founded. Its manifesto had been drafted in Marx’s study and spoke of turning universal suffrage from a fraud into “an agent of emancipation’’ [3]. Engels in his Introduction to Marx’s Class Struggles in France [4] (an account of French politics from 1848 to 1850) explains how he and Marx came to regard the insurrection behind barricades as an obsolete weapon for the working class and goes on to show how universal suffrage could be much more effective.

Marx, then, left open the question of how the working class would win State power and did not rule out the possibility of their winning control of the State by peaceful means.

As to what the working class should do with the State once they had won control of it, Marx always insisted that they should immediately establish a democratic republic. After the Paris Commune of 1871 he declared that the workers would have to make other, more radical changes in the structure of the State before they could use it to establish Socialism.

The Paris Commune was an ultra-democratic regime set up by patriotic elements after France’s defeat in the Franco-Prussian War. After the French Revolution Napoleon had built up a vast bureaucratic and administratively centralised State machine in France. This had remained intact throughout the 19th century despite the insurrections of 1830 and 1848. Only one regime — the Paris Commune — had tried to replace it. This attempt greatly impressed Marx and led him to argue that the workers, once they had won State power, should immediately go on to break up this kind of bureaucratic State apparatus that had grown up too in many other European countries.

In his private letters and notes Marx sometimes referred to the period during which the workers would be using State power to establish Socialism as “the dictatorship of the proletariat”. This has often been misunderstood to mean that he advocated dictatorship in the sense this word is generally understood today. In fact, in Marx's day, the word meant little more than “government” and, as we saw.,Marx advocated that while under the control of the working class (or “proletariat”) the State should be made democratic. [5]

Marx views can be summarised:


Marx’s views were distorted in two opposing ways. First, by some Social Democrats who made him stand for a gradual, peaceful transition to Socialism by means of social reform measures passed by parliament. Secondly, by Lenin.

When Lenin returned to Russia in April 1917 after the overthrow of the Tsar he began to advocate that his party, the Bolsheviks, should aim to seize power in the near future. He knew that they could only do this in a violent uprising. Forced into hiding in August and September he wrote this pamphlet The State and Revolution in which he distorted Marx’s views so as to justify in Marxist terms the Bolsheviks’ planned insurrection.

Lenin's basic distortion is to take Marx’s statements about the need to break up Napoleon’s bureaucratic State machine after the workers had won power and to argue that he was referring to the State generally. This made Marx appear to say that the State should be smashed by the working class before they could win, or while they were winning power.

Lenin quotes Marx’s The Eighteenth Brumaire of Louis Bonaparte and emphasises a passage which reads “All revolutions perfected this machine instead of smashing it” (our emphasis), clearly a reference to a particular State apparatus; in this case the centralised French State. But see what Lenin makes Marx say:

. . . all the revolutions which have occurred up to now perfected the state machine, whereas it must be broken, smashed, (p. 45, our emphasis).

Another example occurs in Chapter III where Lenin quotes from one of Marx’s letters (to Kugelmann, 12 April 1871). In it Marx is saying that the passage from The Eighteenth Brumaire just discussed means that it was essential for “every real people’s revolution on the Continent” not “to transfer the bureaucratic-military machine from one hand to another, but to smash it".

Again, Lenin quotes Marx’s statement that “the working class cannot simply lay hold of the ready-made machinery and wield it for its own purposes” and says:

Marx’s idea is that the working class must break up, smash the ‘ready-made state machinery’, and not confine itself merely to laying hold of it (p. 59).

Taken quite literally, this is true. Marx did advocate that parts of the old State should be broken up. The real question, however, is when he advocated this should be done: Was it before or after the working class had won State power?

It is simply a question of showing that the victorious proletariat must first refashion the old bureaucratic, administratively centralised state power before it can use it for its own purposes (Letter to Bernstein, 1 Jan. 1884 our emphasis). [6]

In fact, Lenin later (Chapter IV) himself quotes passages from Engels’ Introduction to Marx Civil War in France which show that Marx was talking about what the workers should do after, rather than before, they had won power:

From the very outset the Commune was compelled to recognise that the working class, once come to power, could not go on managing with the old state machine; that . . . this working class must . . . do away with all the old repressive machinery previously used against it itself . . . (p. 123, our emphasis).

. . . the state is nothing but a machine for the suppression of one class by another . . . and at best an evil inherited by the proletariat after its victorious struggle for class supremacy, whose worst sides the victorious proletariat, just like the Commune, cannot avoid having to lop off at once as much as possible . . . (p. 127. our emphasis).

Oddly enough, in Chapter VI Lenin, on three occasions, formulates Marx’s views so as to mean that the bureaucratic-military parts of the State must be smashed after the workers have won power. [7] This is all the more confusing in that only a few pages away Lenin had accused Kautsky of admitting “the possibility of power being seized without destroying the state machine" (p. 171, our emphasis). Lenin confused the two separate issues of breaking up the old bureaucratic state machine and how the working class could come to win control of that machine. It suggests that Lenin, when he makes statements like:

he means his readers to think Marx’s view to be that the State must be smashed by the working class while seizing power. This would mean that Marx thought a peaceful capture of State power impossible. Quite apart from Engels’ clear explanation, the fact that Marx did not rule out this possibility is in itself sufficient to disprove Lenin’s distortion. Marx would have seen no contradiction between the working class winning power peacefully and then later smashing the bureaucratic- military machine.

There are a number of other distortions in Lenin’s pamphlet which we will briefly record.

In that part of Anti-Duhring later published as Socialism, Utopian and Scientific, Engels in the course of describing the establishment of Socialism wrote:

The proletariat seizes political power and turns the means of production in the first instance into state property. But in doing this, it . . . abolishes . . . the state as state.

Despite the fact that Engels goes on to explain this (that the State, as a means of class oppression, becomes unnecessary when it has become the representative of the whole community as it would after thus ending class property), Lenin makes the absurd claim that "Engels speaks here of the proletarian revolution ‘abolishing' the bourgeois state . . ." (p. 28)

Lenin describes as "this panegyric on violent revolution” (p. 33) another passage from Anti-Duhring where Engels writes about the role of “force” in history. Here Lenin disguises the fact that Marx and Engels understood by "force” not necessarily and exclusively “violent insurrection” but also the mere exercise of State power, whether accompanied by violence or not.

Lenin quotes (p. 96) from an article in an Italian journal without making it clear that the passage he reproduces is not really Marx’s own words, but Marx’s summary in heavily sarcastic terms of the arguments that might be used to refute a pacifist anarchist. [8]

Again, Lenin quotes (p. 113) a passage from Engels’ criticism of the German Social Democrats’ 1891 programme where he says that "the democratic republic . . . is even the specific form for the dictatorship of the proletariat”, (our emphasis). This did not fit in with Lenin’s views so he argues that Engels only meant that the democratic republic was “the nearest approach to the dictatorship of the proletariat” (our emphasis).

Finally, in Chapter V Lenin makes a false distinction between Socialism and Communism in a bid to prove that, according to Marx, the State would not finally disappear till "Communism” and so would still exist under “Socialism”. Marx and Engels in fact made no distinction between Socialism and Communism ; they were terms they used interchangeably to refer to future classless, Stateless society based on social or common ownership. [9]

Lenin’s The State and Revolution is not, as it claims, a re-statement of Marx’s theory of the State but a gross distortion of it.
Adam Buick

That's all of the April 1970 issue of the Socialist Standard now on the blog.