By The Way: Beveridge on Want—and Adventure (1943) 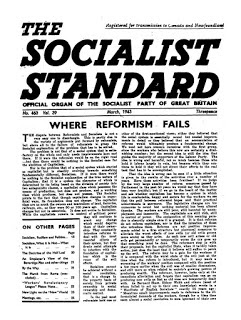 
"'Winter and want tame man and beast'. Adventure comes not from the half-starved, but from those who are well fed enough to feel ambition."

Thus Sir William Beveridge, on January 19th, at Plymouth, in answer to criticism by "an American” that if there had been a Beveridge Plan in Queen Elizabeth's day there would have been no Drake or Hawkins or Raleigh.

Socialists might be tempted to add that the world would have been no worse off without them, especially the first two.

What does strike us is the confirmation, from a very unexpected quarter, of a Socialist contention—i.e., that starvation does not make revolutions, or revolutionaries.

Starvation may provoke blind elemental revolts, which are sometimes welcomed by the ruling class as an opportunity to "teach the workers a lesson.”

Despite the belief of Anarchists, based on Bakunin’s views, and despite the unemployed movements of pre-war days, starvation alone will not bring about Socialism, which requires socialist knowledge.

"One advantage the workers do have—that of numbers," wrote Marx in the Inaugural Address of the First International. "but numbers are useless unless organised by experience and guided by knowledge."

The Hungerford Club
Members of Bloomsbury Branch, distributing leaflets advertising Party lectures outside the Kingsway Hall recently, found themselves standing next to a kindly lady distributing tickets for a poetry reading by Miss Sybil Thorndike at the Friends' Meeting House, where there was to be a collection in aid of Hungerford Club.

The back of the ticket gave the following details:—


The Hungerford Club, in one of the arches under Charing Cross Station, is the war-time home of many who used to sleep on the Embankment or in the Parks. For these men and women public shelters were unsuitable, but people accustomed to a vagrant life avoid ordinary public institutions. Thus the Unit that had provided the male staff for the Crypt at St. Martin's launched the Club with the co-operation of the Westminster City Council. Since the beginning of 1941 more than a hundred people have remained at the Club from early evening until morning, and many have found in it a home and a friendship such as they have seldom known before.

In 1943, therefore, despite a tremendous artificial war prosperity boom, in the West End of London, when it is almost impossible to get into the Berkeley, the Ritz or the Carlton unless you are really very rich, when there are regular traffic jams outside the Savoy of taxis and large saloon cars, which somehow, despite war restrictions, the same wealthy class still ride in, when grapes are offered from stalls in Piccadilly at 12s. 6d a pound and roses sold at 7s. 6d. a bloom, one hundred pitiful battered human wrecks regularly congregate in the arches under Hungerford Bridge, Charing Cross, because they are so utterly destitute and demoralised that they cannot even make use of the so-called “public shelters.” Socialists have never claimed that the majority of the working class are completely destitute, or would become so. Nor have they thought that it would improve matters if they did.

But the fact of the existence of these destitute wretches, literally infinitely inferior in their position to animals, in the midst of one of the greatest aggregations of wealth in the world, is itself shattering comment on contemporary capitalist society. These hundred completely destitute, pre-suppose many thousands (in Westminster, in this case) only slightly better off. Above these again, is the general level of the working class. Seebohm Rowntree calculated, before the war, that one in every six working people in York were definitely below the poverty line—i.e., going short of necessities.

As for the misguided but well-intentioned efforts of the members of the Society of Friends—surely no more flagrant example of the futility of philanthropy under capitalism can be found. How footling are the efforts of these "welfare workers" in trying to make the damp, dark, stinking arches of the Southern Railway into a “Hungerford Club." “A home such as they have seldom known before," and yet within a stone's throw there are scores of huge mansions deserted by the rich since the first blitz.

We are very well aware that even if these poor wretches were quartered in the empty London mansions of the wealthy, nothing fundamental would be achieved.

The fundamental problem is the poverty of the poor. Only when the class who produce houses and wealth in general also own the means whereby it is produced will there be an end to such revolting abominations as the “Hungerford Club."
Horatio.
Posted by Imposs1904 at 9:22 PM