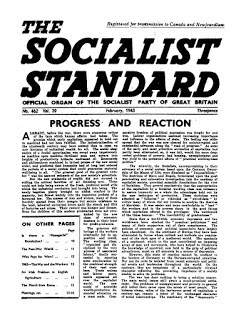 From the February 1943 issue of the Socialist Standard

The capitalist class are able to maintain their ownership and control of society’s means of life because they have control of the machinery of government through which laws acceptable to the owning class are made and enforced. That is why Socialists point to the necessity of a Socialist working class democratically obtaining control of the machinery of Government in order to introduce Socialism. Various opponents of Socialism give other interpretations of the facts and one of the theories now achieving some acceptance is that effective control has passed, or is passing, out of the hands of the capitalist class, not into the hands of the working class, but into the hands of the managerial section of industry. A recent book (The Managerial Revolution, by J. Burnham; Putnam; 7/6)) states the case for this view. It was reviewed by the City Editor of the News-Chronicle, the argument in the book being summarised as follows : —


His (Mr. Burnham’s) thesis briefly is this. The dominant political power was once in the hands of the great landowners, the feudal lords; then it passed to the big merchants and manufacturers—the capitalists. But capitalism is now moribund, because the people who own the instruments of production no longer manage them. The next phase is not socialism . . . but—if I may coin the word, “managism.” Power is now passing to the “social group or class of the managers,” who, in the course of a generation or so, will have achieved social dominance, will be the ruling class in society all over the world.— (News-Chronicle, August 10, 1942.)

It is interesting to observe that the City Editor of the News-Chronicle, Mr. Oscar Hobson. whose views on this matter are certainly entitled to be given some weight, can see no signs that such a development is taking place. He writes : —


The works managers I know are not of the stuff of which revolutions are made. In this country they are singularly unvocal. They are not a class apart, differentiated from finance executives and all the rest of the capitalist hierarchy. And when Mr. Burnham sees the rise of Nazidom in Germany as part and parcel of the managerial revolution I almost scoff! Where among the Nazi leaders will he find a “manager”?

Who Controls Whom ?
Actual incidents in contemporary capitalism support Hobson’s view as against Burnham’s. All the evidence is that in Germany and Italy it has not been the case that managers have become the political ruling class, but that the Nazi and Fascist leaders, once they have achieved control of the machinery of Government, have set about acquiring or extending their ownership of industrial, commercial and financial concerns. Their actions prove that they at least do not believe that management is the thing that matters, they have gone all out to become owners. A writer in the Times recently described how the Fascist leaders in Italy have used their hold on political power to acquire ownership or shareholdings in businesses; their political control has been used to make them rich. The Times writer summed it up by saying that whereas the Fascists jibe at Britain and America as countries of “plutocrats,” i.e., countries where the wealthy have acquired political power, Italy under Fascism may be described as a country of “cratoplutes,” a country in which the Party bosses have used political power in order to acquire wealth.

In this country recently we have had some examples of how capitalist industry is controlled and the way that control is exercised. On November 17 the case of Sir Roy Fedden was discussed in the House of Lords. According to Lord Brabazon (reported in the Times, November 18) Sir Roy Fedden was chief engineer of the Bristol Aeroplane Company, and was reputed to have outstanding technical achievements to his credit, among them “the most successful radial air-cooled engines in the world,” and Lord Sempill claimed that Fedden is “one of the greatest geniuses in aircraft design in the world.” But the Company, which was originally founded by Sir George White, is controlled by the family—”Never had anyone but the family and relations of it been allowed on the board. Of the present board, none was an engineer ” (Lord Brabazon). But trouble arose and when Sir Roy Fedden refused to agree to the board’s order that part of his  organisation was to be controlled by the Production Manager he was dismissed. Sir Roy Fedden’s own statement was:—


On February 6 the Chairman gave me six months’ notice, on the grounds they wanted to make a new agreement. … I have never wished to leave the company. While negotiations were going forward I was dismissed on October 1.” (Evening News, October 31, 1942.)


The trouble was a symptom of other troubles in the aircraft industry. Something should be done to prevent a repercussion of the same kind of difficulties in which people on the financial side made war against those on the technical side, and, as in the case of Sir Roy Fedden, threw them out of a job. The other companies specifically concerned with such trouble were the De Havilland Company,, the Fairey Aviation Company, Napiers and Sons, and Short Brothers. There was another, but the matter was sub judice and he would not mention the name.

It will be seen from this that the man with the technical knowledge was entirely at the disposal of the family who owned and controlled.

Another illustration of the vital importance of ownership was given by the case of Sir Edward Baron and Carreras, Ltd., the £5,000,000 tobacco concern. Here the position was that the Baron family hold 150,000 out of 240,000 £1 ordinary shares and it is only the ordinary shareholders who, under the articles of the company, have voting rights on the Board. The case taken to Court revolved around the question whether Sir Edward Baron, the Managing Director, should persist in his refusal to let the majority of directors make their own choice of a director to be re-elected to the Board, it being alleged that Sir Edward Baron had given a verbal contract not to use his voting rights. The Court held that no such contract had been entered into (Times, December 19, 1942), so the family group of shareholders will continue to control the management of the Company. Where, it may be asked, do Mr. Burnham’s managerial group come into this picture? It was solely a dispute between two groups of owners and their nominees, the Baron group and the minority group—nobody ever thought of mentioning the non-owning managers.

It is quite true that with the growth of mammoth amalgamated concerns the direct control of family groups declines, and that in the public utility corporations the State itself takes a hand in the appointment of the boards of directors. This is, so to speak, an interference by the capitalist State, representing the capitalist class as a whole, in the affairs of individual capitalist undertakings, but two points of paramount importance should be observed. One is that the main interest of the owners, the safeguarding of their income from their investments, is not interfered with. The second is that the creation of public utility corporations under some kind of Governmental control is not in the slightest degree the work of the managerial group but is carried out by those who control the machinery of government.

Russia also has been instanced as a country where the so-called managerial revolution, is in progress, but according to a writer in the Economist who refers to Schwarz’s ”Heads of Russian Factories” (Economist, January 9, 1943), Russia has now gone over to one-man control, the controller being the industrial manager appointed by the State. The Economist writer claims that as a result of recent changes the new type of industrial manager in Russia has as his aims : "Fulfilment of the monthly plan, a rising graph of production, absolute obedience and discipline in the workshop, and one-man direction of the plant.” He has “almost unlimited powers to establish his authority and to deal with slackness and infringements of labour discipline.” True he has to deal with the Bolshevik Party “cell” but ”the once familiar conflict between party cell and factory director has long been forgotten. The fullest unity between party and management has in fact been achieved. The manager is now only very rarely a non-party man. The Party on the other hand has evolved into an almost non-political body. All its interests and activities have been centred on the problems of production.”

Here again we see that the State and those who have its backing are supreme against other groups.

In spite of Mr. Burnham the managers will not become a new ruling class unless they do so through political control. The task of the workers still remains that of gaining political control for Socialism.