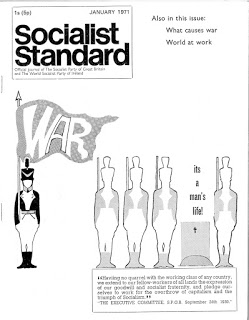 The theory of The Socialist Party of Great Britain is Marxist in the sense that certain of our key ideas about society, economics and politics are derived from Karl Marx.

Although our case rests entirely on its own merits and not on what Marx may or may not have said, we have always been ready to defend Marx’s views where we believe them to be correct against criticisms based on an ignorance of what he wrote.

Recently for instance, the Guardian claimed that “Marx has been proved wrong on fundamentals; the workers far from being denied a fair share of profits and so becoming poorer, are vastly better off”. Is this true? Was it fundamental to Marx’s economic theory that under capitalism the workers would come to own less and less material possessions?

The short answer is, No. Marx did not believe that the amount of goods and services the workers consumed would necessarily have to decline. What he did say was that the misery of the workers would increase, but he did not equate this misery with destitution. For him, as we shall see, misery referred to the general circumstances under which workers, however well-paid, had to live and work.

A house may be large or small; as long as the surrounding houses are equally small it satisfies all demands for a dwelling. But let a palace arise beside the little house, and it shrinks from a little house to a hut. The little house shows now that its owner has only very slight or no demands to make; and however high it may shoot up in the course of civilization, if the neighbouring palace grows an equal or even greater extent, the occupant of the relatively small house will feel more and more uncomfortable, dissatisfied and cramped within its four walls.

A noticeable increase in wages presupposes a rapid growth of productive capital. The rapid growth of productive capital brings about an equally rapid growth of wealth, luxury, social wants, social enjoyments. Thus, although the enjoyments of the worker have risen, the social satisfaction that they give has fallen in comparison with the increased enjoyments of the capitalist, which are inaccessible to the worker, in comparison with the state of development of society in general. Our desires and pleasures spring from society; we measure them, therefore, by society and not by the objects which serve for their satisfaction. Because they are of a social nature, they are of a relative nature.” (Marx-Engels Selected Works, Vol. 1, pp.93-94, Moscow, 1958)

Marx understood subsistence, too, in a relative sense. According to his theory, wages fluctuate about the subsistence level of the worker. Certain critics (and even supporters) have taken this to mean that there was a fixed amount of goods and services above which real wages could never rise. This so-called Iron Law of Wages was repudiated by Marx. He regarded the subsistence level as something which varied not only amongst workers of different skills but also from place to place, in the same place at different times and even, to a small extent, under the influence of the workers’ own trade union activities.

To suggest that Marx expected wages to fall towards, and even below, some absolute poverty line is to misunderstand him completely.

Marx also writes in Wage Labour and Capital that, even though the most favourable situation for the working class under capitalism is the fastest possible growth of capital, “however much it may improve the material existence of the worker, does not remove the antagonism between his interests and … the interests of the capitalists” (p.98). Marx returned to this theme in Chapter XXV of Capital which considers “the ‘influence of the growth of capital on the lot of the labouring class”.

Marx’s comments on the occasions when the wages of some workers have risen as a result of a temporary labour shortage again make it quite clear that high wages do not end the economic exploitation of the working class.

The more or less favourable circumstances in which the wage-working class supports and multiplies itself, in no way alters the fundamental character of capitalist production.” (p.613).

A rise in the price of labour, as a consequence of accumulation of capital, only means, in fact, that the length and weight of the golden chain the wage-worker has already forged for himself, allow of a relaxation of the tension of it. (p.618, Moscow, 1961).

Later in the same chapter just before the passage about the “accumulation of misery”, Marx explicitly states that high wages do not affect the misery of workers either:

In proportion as capital accumulates, the lot of the labourer, be his payment high or low, must grow worse. (p.645)

Clearly by misery Marx cannot have meant absolute poverty. For, as this passage shows, workers may be better off materially but still worse off in some other sense. This referred to the conditions under which they had to work. Marx mentions the boring drudgery workers had to perform under capitalism in place of the pleasure they could get in a Socialist society from creating useful things. He also mentions the fact that workers are employed by capitalists and deprived by them of the fruits of their labour. As he put it in 1875 in a criticism of the Iron Law of Wages:

The wage-worker has permission to work for his own subsistence, that is, to live, only insofar as he workers for a certain time gratis for the capitalist (and hence also for the latter’s  co-consumers of surplus value); that the whole capitalist system of production turns on the increase of this gratis labour by extending the working day or by developing the productivity, that is, increasing the intensity of labour power, etc.; that, consequently, the system of wage labour is a system of slavery, and indeed of a slavery which becomes more severe in proportion as the social productive forces of labour develop, whether the worker receives better or worse payment. (“Critique of the Gotha Programme”, Selected Works, Vol. II, p.29)

In the next article we will examine this concept of “relative wages” which Marx did believe would tend to decline under capitalism.

In the meantime readers are referred to two useful articles: