On the Eve of the Referendum in Northern Ireland – Workers Have a Choice! (1973) 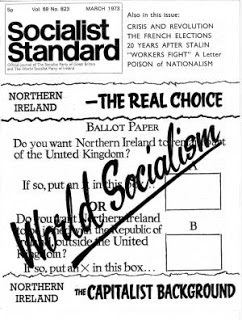 This Referendum is a sham. You are being offered a false choice. The constitutional position of Northern Ireland is not an issue of any concern to you.

Whether Northern Ireland remains part of the United Kingdom or becomes part of the Republic of Ireland will make no difference whatsoever to the basic structure of society where a privileged class monopolises the means of production while the rest have to work for wages and where wealth is produced not to satisfy human needs but for sale with a view to profit. It won’t even make much difference to your present standard of living in terms of wage levels, housing, unemployment and the other problems you face.

Yet it is this class structure of society — which exists equally in Britain, Northern Ireland and the Republic — that is the basic cause of the economic and social problems faced by the great majority of society, those who, whatever their religious background, depend for a living on earning a wage or salary. This is why a mere constitutional change will make no difference, not even a radical one achieved by violence.

Look at the Twenty-Six Counties which achieved “Independence” in 1921 after a bloody war against the British Army. What difference has this made to the position of wage and salary earners there? It has merely provided a different political framework within which they can suffer the problems of capitalism, governed by Irish, instead of British, politicians representing capitalist interests. It has meant little more than painting the pillar boxes green. And painting the pillar boxes in Northern Ireland green is about all voting to join the Republic would achieve. Not of course that staying part of the United Kingdom is going to make any difference to these problems either.

The only change that will is a world-wide social revolution that would make all that is in and on the Earth the common heritage of all mankind to be used to provide an abundance of wealth to which all could have free access according to need. This essentially peaceful revolution can only occur when the great majority of wage and salary earners in all countries are in favour of it and organise democratically to carry it out. It involves a rejection of all nationalism and all attempts to solve problems on a national scale. In the context of Northern Ireland it requires you to reject both Republicanism and Unionism, and their various offshoots.

For years you have allowed yourselves to be enmeshed in a political argument, even to the extent of killing and being killed, that was of no concern to you. The Republicans, on the one hand, sought your support for the establishment of an independent All-Ireland State. The Unionists, on the other hand, wanted you to back their demand that the North-East of Ireland remains part of the United Kingdom. Both sides have not hesitated to use violence, legal and illegal. Because, as far as the capitalist interests they represented were concerned, the issues at stake were vital: Should or should not the highly industrialised area round Belfast have been cut off from the rest of industrial Britain behind the tariff walls of an industrially-backward Irish State? Should or should not the Belfast capitalists have been denied free access to the markets of the British Empire just so that the smaller capitalists of the rest of Ireland should be protected from British competition?

These were the purely capitalist issues that lay behind the facade of religious and constitutional conflict. But for the past ten or so years, as first the Anglo-Irish Free Trade Agreement of 1965 and now the Common Market show, this issue no longer divides the capitalists of Ireland. But, unfortunately, their battles of yesterday continue to be fought by some of you today.

Though a sham, this Referendum does at least provide a chance for you to protest against the kind of politics that has dominated this part of the world for nearly a hundred years and which has brought it to the brink of an utterly pointless civil war. If you want to register your rejection of both Irish Republicanism and British Unionism in favour of World Socialism, we suggest you don’t abstain but go to the polling booths and write the words “World Socialism” across your ballot papers.