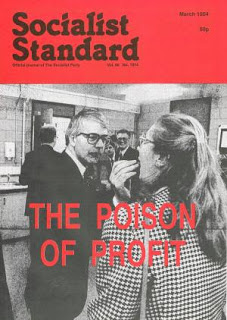 From the March 1994 issue of the Socialist Standard

Last year we dealt with the various factors that were leading to a trade war (Socialist Standard, April 1993). The possibility of a return to the "beggar thy neighbour" policies of the 1930s was discussed in the light of NAFTA (North American Free Trade Area) and GATT (General Agreement on Tariffs and Trade).

Prior to the recent signing of these agreements the Establishment-controlled media argued that the alternative to signing these agreements was a gigantic world slump. Quoting the OECD, the Financial Times (9 November) stated:


"a successful round would add about 200 billion dollars a year to world trade. . . the increased business would certainly help the international economy from its current recession. If the talks collapse, then these potential gains will be lost. But, worse, a tit for tat trade war would lead to higher tariffs, higher prices, reduced sales, lost export opportunities and lost jobs."

Before the recent signing of GATT, the world was already dividing into trade blocs such as NAFTA, comprising Canada, the United States and Mexico, the EEC (Europe), and the Far East under the domination of Japan.

A similar attempt has been made in Latin America to form a trading sphere made up of Brazil, Argentina and Uruguay (MEPOSIL). Currently Brazil and Argentina are in dispute over movement of capital goods between the two countries. Argentina accusing Brazil of dumping.

NAFTA, when signed, was considered a triumph for the diplomacy of President Clinton. It has not, however, resolved the trade rivalries between the member countries. Canada has raised tariffs on farm products since GATT was signed "to make up for the protection its farmers lost in the GATT agreement. Tariffs are expected to be as high as 350 percent on butter. 290 percent on cheese and 270 percent on eggs" (Daily Telegraph, 16 December). The United States is pressing Canada to phase out these tariffs in 10 years instead of 15 as required under GATT’s rules.

The revolt of the Zapatistas in Mexico had their leader denouncing NAFTA from a hotel balcony as "a death sentence for Mexican Indians" (Economist, 22 January). In short, the Indians see no hope for themselves under NAFTA. Unlike the European Community there is no offer of regional aid to the poorer members of this trade bloc.

Export subsidies
One of the claims made by the advocates of these multinational agreements is that freer movement of goods will result in a raising of living standards world wide. Because many of the goods exported by the major industrialized countries have export subsidies the opposite is the case as far as the "lesser developed countries" are concerned. The higher prices of these products, especially agricultural products, are often more than they can afford. With much of their revenue being consumed in paying crushing interest payments on outstanding loans, far from improving, their living standards are worsened.

Similar attempts have been made in the past to reach agreement on a world scale with the object of preventing trade disputes and the economic rivalries that result eventually in world wars and slumps with mass unemployment. The Bretton Woods Agreement was one such example when in 1944 it was proposed along with the IMF and the International Trade Organization. The latter, the ITO, was rejected on the ground that it would provoke hostility from some of the major trading powers. No such considerations apply today. There is now a World Trading Organization replacing GATT.

The problem that capitalist politicians have to solve is how to have world trade without the various powers falling out as they compete for a bigger share of the world market. Bretton Woods, out of which came the IMF, gave rise to a system of fixed exchange rates that could periodically be adjusted where trade imbalances occurred. It appeared to work initially but with the entry of countries such as Japan into the world market and the subsequent erection of trade barriers it finally ended when President Nixon ended the dollar’s convertability. Under this arrangement America provided enough currency to provide a gold exchange rate system.

The violent currency movements that have occurred in recent years is evidence of the developing trade imbalances instead of the convergence of currencies as the enthusiasts for the European Community promised. Currency adjustments cannot overcome the problems of trade rivalries. Tight control of the D-Mark by the Bundesbank has not prevented the deepening recession in Germany.

Erection of trade barriers does not in itself afford protection against rival economic competitors or prevent import penetration. American multinationals were not in fact kept out of Europe by the formation of the EEC for the simple reason they were already established in Europe; Kellogs Cornflakes, Budweiser Beer, Camel Cigarettes, Ford Motors and the inevitable McDonald’s to mention only a few.

The only time anything approaching free trade can occur is when one world power has acquired a dominant position in the world. This was the case in the middle half of the 19th century, when the British Empire was the dominant world power with unlimited access to a large Empire from which it could obtain raw materials at minimal cost. A similar situation existed after the Second World War when America was the predominant world economic power for about two decades. In this sense protectionism has dominated, apart from these two periods in the history of capitalism.

Whilst NAFTA was launched under the auspices of free trade it is in reality protectionist as is the EEC ("Fortress Europe”). The three trade blocs that have emerged have access to cheap labour and raw materials. In the case of NAFTA, America and Canada can increasingly use Mexico for production of labour-intensive goods. This will reduce their interest in the Newly Industrialized countries such as Singapore, South Korea, Taiwan and Malaysia which are all heavily export-dependent. The percentage of GDP that comprise exports are 30 percent for South Korea, 44 percent for Taiwan and well-over 90 percent in the case of Hong Kong and Singapore. The main markets for their exports are OECD countries such as the industrialized nations of North America, western Europe, Australasia and Japan. The OECD accounted for an average of 44 percent of the export of South Korea, Taiwan, Singapore and Hong Kong in 1992. Any failure of GATT will cause serious economic problems in these export-dependent economics.

China has officially admitted that it has over 130 million agricultural workers surplus to the requirements of its industry. Many of them have defied regulations and flocked to the cities in search of work. With surplus labour-power of this size, where wages can amount to less than a dollar an hour, it is not difficult to see what impact this will have on the world market if utilized.

Hardly had the ink dried on the new GATT agreements before the United States and Japan were involved in a dispute over computer copyrights and access for computer hardware, with America alleging that Japan was violating the agreement. On a recent visit to Japan, Jean Spero, US Under-secretary of State for Agricultural and Economic Affairs, accused Japan of foot-dragging. Speaking in Tokyo she said: "Quite frankly progress has been disappointing and when the leaders meet it will be against a backdrop of the largest trade deficit in the history of United States-Japanese relations” (Daily Telegraph, 13 January). Subsequently Lloyd Bentsen, US Treasury Secretary, warned that "his country would have to re-examine the basis of its bilateral trade agreement with Japan if negotiations fail to make sufficient progress by next month" (Daily Telegraph, 24 January). Lloyd Bentsen said "Japan is out of step. It has the lowest penetration of manufactured imports and it has the lowest foreign investment levels among major nations." At the same time the European Community is in trouble with GATT for operating a restrictive quota of bananas while Latin American countries claim discrimination against them" (Daily Telegraph, 24 January).

Last year it was discovered that Germany had signed a secret trading agreement with the United States unbeknown to its European partners leaving them out in the cold (Daily Telegraph, 21 June). With the majority of European countries in recession the likelihood of trade barriers and protectionism increases, particularly as the recession deepens.

There is absolutely no convincing evidence that GATT involving 105 countries can increase free trade when it retains many of the features of protectionism. Its history is one of endless disputes, complaints and alleged violations. Its ultimate effect is the opposite of what its advocates claim. The groupings of NAFTA, the EEC and the Far East are expressions of competing capitalist groupings struggling for access to the world’s markets.