The number 24 bus is not known in the records of classical legend as the site of miracles. Nobody on the number 24 bus route has ever turned water into wine (although later at night cans of4X have been seen to turn to urine) and rarely have moving statues been seen occupying the seats reserved for the elderly and pregnant women. No, it was certainly no miracle which happened last Monday morning; teams of Vatican investigators will not be treading their way from Rome to Mornington Crescent (for it was there that it happened) to record the mysterious happening. There are no miracles; it was no miracle. It was simply a slightly extraordinary event. When I say extraordinary I am not alluding to those strange and semi-credible happenings so frequently found within the dull, unwanted pages of Readers Digest (publisher: the CIA). There you will find stories of women who didn’t know they were pregnant and then one day, while enjoying a casual game of beach volleyball, gave birth to triplets, each of a different ethnic background. Or men who fell from fifty-storey skyscrapers on to a passing bus in which was sitting their long-lost twin. Extraordinary! Incredible is the concept which springs to mind. Presumably the CIA use Readers Digest as a sort of testing ground for human gullibility. The theory must be that if they believe it in the Readers Digest, why not try it out on the suckers in the rigged Latin American election? So let’s be clear about this: we are talking neither of miracles nor stories of the strange and mysterious. All that happened on the 24 bus last Monday was a mildly noteworthy set of circumstances.

I had just returned from a weekend speaking trip to Glasgow. The exhaustion of overnight travel and the joyful memory of a fraternal visit fought in my mind as I made my weary way to the job. Robotically, from shower to letterbox, right shoe on and then left shoe, up the street to the bus stop, the drill was performed and the miserable queue of job-seekers who had sought, found and were fed up was waiting as usual. The bus came. And then . . . 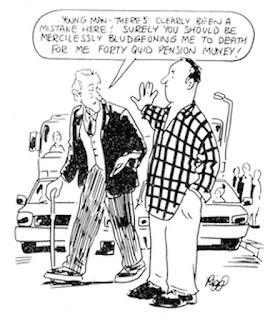 It began when a woman in the bus queue, carrying a particularly bulky suitcase, stooped to lift it only to find herself pounced upon by two men who insisted upon helping her carry it on. That was kind. Then came a boy who discovered that he was ten pence short on the fare. The woman with the case took out ten pence and paid it. “I’ll pay you back, missus,’’ said the boy. “Pay me when you win the lottery, love,” she replied. The boy’s fumbling for his coin had made the bus a few seconds late and, as it moved off, along ran a man clearly anxious to get on. The driver stopped, opened the doors and smiled at the latecomer. “That was decent of you,” said the man. “You’re more than welcome, mate,’’ said the driver. “I hope you’d do the same for me.” It was at that point that the blind man asked the best stop to get off for University College Hospital. A debate occurred. Passengers vied with one another to be more helpful. “Look,” said the girl in a leather jacket who had recently been reading the Sun, “don’t you worry about the best stop; I work only a few streets from there and it won’t take me five minutes to walk you to exactly where you want to go.” The passengers approved. The woman with the suitcase passed around wine gums. We only took as many as we needed. (I took none.) A couple of Dutch tourists got on and discovered they were going the wrong way for Camden market. But an old man suggested another market where things were cheaper and you could get musical Christmas cards at half price. Whatever musical Christmas cards are, the Dutch couple seemed happy and were soon sharing in the wine gums. The boy offered to show them round his school (they were teachers it turned out) and the blind man told a story of how he had once taken the day off school to go to a Beatles concert. At which point the bus driver asked if anyone would mind if he played an old Beatles tape which his friend had made for him. We all assented. Quite a few sang. It felt like a trip to the seaside. It felt like every day and every journey and every destination should be like this, or, at least, less like it usually is. It felt as if we were a convoy of travelling pups having a lick at our own humanity. It tasted good.

So no miracle occurred. It was probably hardly worthy of note. But it happened and probably it happens much more often than is recorded. People were decent. For the few minutes of that journey on that bus we all overcame the tremendous temptations of this system to push and shove and trample upon one another and act inhumanly, all of which happens daily in the name of “healthy competition”. And then that competitive indecency is paraded before us in the name of “human nature”, as if we are not pups but rotweilers. And so humans are taught to hate themselves—to put muzzles upon themselves lest they bite. But in truth we are happier co-operating than biting or fighting. It was co-operation which allowed the species to survive, after all. And alienated as the profit system makes us from the reality of our species, there are moments which are not miracles—moments when mothers feed their babies and children play in the park and the elderly are crossed over busy roads and one person simply smiles at another without a sinister motive—when humanity triumphs over capitalism. These are not miracles or incredible events. They are merely spectres of what could be if we were to live as we might live.