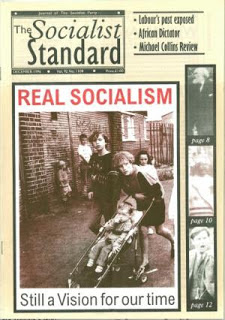 In 1886, the bottom 10 percent of manual workers earned 69 percent of the median manual wage, while the top 10 percent earned 143 percent. Despite the huge shifts in manufacturing over the next 90 years—the growth of new' industries, the rise of trade unionism, the impact of two world wars—the relative position remained virtually unchanged. But since 1977 the relative position has worsened for the bottom 10 percent of manual workers who now get just 61 percent of the median against 161 percent for the top 10 percent.

The Reverend Stanley Mast, of the LaGrave Avenue Christian Reform Church, offered an invocation that should become the official fund-raising prayer of both parties. “O God. as we gather together tonight to honour important people in our country', we pause to acknowledge that you are master of the universe and Lord of the nations.” the Reverend prayed. “As we focus on finances and politics, we give you thanks for the gift of wealth, we thank you for the privilege of living in America, this great land of freedom, a land that not only allows but even encourages the individual pursuit of wealth. We thank you, O God, for the success so many of us have had in that pursuit. . . . Bless our guests of honour. May their generosity and faith inspire us all. Bless these upcoming elections. May the right people be elected. And God bless America. Amen.”

Much more hot air, and some acute cases of handwringing have been prompted by a United Nations report that the combined wealth of the world’s 358 billionaires equals the combined incomes of the world population’s poorest 45 percent, or 2.3 billion. Leaving aside the mismatch between wealth and income in that comparison, so what? It is not ownership that is important so much as what the owners or controllers of wealth do with it.

A Midland care assistant was unceremoniously sacked by health chiefs after being injured in an attack at work, it was claimed today. Jenny Jennings, of Solihull Lodge, said she was so badly kicked in the knee by a resident at a Chemsley Wood home that she was unable to do her job . . . Mrs Jennings said it was the second time a member of staff had been badly injured by the resident but the trust management had not acted to prevent it happening again . . .  Solihull’s Healthcare’s director of personnel Mr Nick Gillard said the resident’s care would have been addressed following the first attack. “Having gone through channels and followed policy to the letter Mrs Jennings’ employment was terminated due to ill health,” he said.

The Saudi government has tightened its controls on satellite TV, forcing viewers to dismantle dishes and subscribe to its own TV network. On offer is a mixture of Arabic and international programming selected by the Ministry of Information. A five-minute delay has been introduced on foreign channels so that “unsuitable material” can be censored.