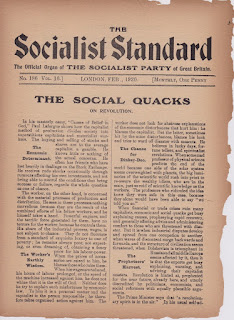 From the February 1920 issue of the Socialist Standard

The aim of the Socialist Party is to make Socialists ! That is a truism so obvious that it would seem that only a platitudinarian would think it worth his while to repeat it. But the fact is that this truism—perhaps because it is so obvious—is sometimes lost sight of by many whose theory and practice of the principles of Socialism are beyond dispute.

Socialism has two aspects, one of which may be called the "present," and the other the "future" aspect, and because of the presence of these two aspects, a certain amount of confusion often occurs.

The "present" aspect of Socialism may be defined as those activities, exercised by the men and women who have realised their position as wage-slaves, and who have, therefore, a desire for a system of society wherein they shall be economically free, which have for their object the overthrow of capitalism and the establishment of the Socialist Commonwealth. The "future" aspect of Socialism comprises all the manifold activities which will be possible when the new social system—Socialism—has been established.

Many Socialists forget, if they have ever known, that Socialism is not an end in itself, but the means to a fuller and more richly endowed way of life. No manifestation of life, whether it be economic or political, artistic or philosophical, is or can be an end in itself. Life moves on to a higher or lower plane, aided or hindered, as the case may be, by the activities of its agents, who, in their turn, are acted upon, and re-act upon, the eternal and unresting forces of nature.

The aim of the Socialist Party is to make Socialists! How, then, shall we, who have torn the veil of illusion from our modern social system and seen the naked body of Capitalism in all its hideous deformity, use our knowledge to bring to our way of thinking the men and women of the working class, without whose assistance our ultimate object is unattainable? We must show that capitalism has outlasted its usefulness; must emphasise and criticise the evils which are now the inevitable consequence of its continuance; we must point out that capitalism as a social force has played its part and that the time is ripe for the next stage in the evolution of society to be born.

Capitalism is in its death-throes, but its time in dying will be determined by the efforts of the working class as a whole to hasten its demise. Even the question as to whether or not the death-night of Capitalism will herald the dawn of the Socialist Commonwealth depends upon the growth of the political and economic intelligence of the workers.

The first aspect of Socialism, the "present" aspect, is more applicable to actual members of the Socialist Party. This can, therefore, be left for the time being. The writer will, perhaps, revert to it in a future article.

The second aspect, the "future" aspect, is particularly important with regard to the making of Socialists. Many people, while sympathetic to the idea of Socialism, hesitate to join up with the Socialist Party because they are unable to visualise what conditions of life, other than the material, will obtain when the old system of Capitalism has passed and the new system of Socialism has taken its place. Many people consider, for instance, that under a system where the necessities and comforts of life are assured to everyone, society will lapse into a state of apathy and negligence. They cannot understand that, where people work for use and not for profit, the better the work done by the individual, the greater the benefit bestowed upon the society of which the better worker is a unit. The workers under the Socialist regime will work for themselves as a collective body and not, as now, for a comparatively few social parasites, who by reason of their class position as capitalists as against the workers' position as wage-slaves, hold in their hands the power of dealing with the very lives of the majority of the community, not as they will, but as the fluctuations of economic circumstance may force them to.

Again, many sympathisers with Socialism and Socialists, who have a smattering of artistic knowledge and appreciation—in most cases only a very minute smattering is possible to a member of the working class—seem obsessed with the idea that the advent of Socialism would mean the cessation of all artistic activities. Actually, the advent of Socialism would have the opposite effect. At present the working-class boy who happens to show any aptitude for literature or art very soon learns that such things are not for him. He learns that they are the prerogative of those people whom he is taught to consider as his "betters." Without help or encouragement, any desire he may have to become a writer or a composer quickly dies of inanition—before it has even had time to try its wings. Moreover, when it is considered that, generally speaking, a long and costly training is necessary in order to develop the literary and artistic faculties, it can be seen how improbable it is for a boy, say of 14 years or younger, who is compelled on leaving school to find work as an errand- or office-boy, or in some suchlike inane and enervating capacity, ever to know the joy of creating a great work in the realm of literature or art. He is soon too busy trying to discover how to earn a few more shillings a week to trouble himself about such unremunerative things as books, or painting, or musical notation.

Under Socialism, which we who are Socialists conceive as an intelligent and ordered system of society, the youthful mind would be encouraged to develop along the lines most in accordance with its particular receptivity. There would be no need for the youth of either sex to stampede, immediately on leaving school, to the factory or office door. They would have advantages similar to those now enjoyed by the children of the wealthy class, and it is not too much to say, I think, keeping in mind our knowledge of the modern university and college product, that the children of the working class would far outstrip, in the way of science, art and literature, the individuals who now leave their universities and colleges, in the majority of cases, with little else to show for their training than an "Oxford accent" and an unbounded conceit.

Socialism would mean the opening to the youth of the working class of a world undreamt of by them at present. To those members of the working class who cavil at Socialism because they fear that the downfall of Capitalism would mean the downfall of what they consider "art" and "literature," I would ask, "What are art and literature to you? What really do you know or care about the great artistic products of the world ? You have neither the time, nor the inclination, nor the means, to make a study of such things. Your business is to work in order to get the wherewithal to live. Leave such things to your masters, so long as you are content to have masters."

Even if the destruction of Capitalism meant the destruction of all known art and literature, what then? If the men and women of the working class are incapable of building a more lofty tower of art than any that has yet been erected, they are not worthy to occupy the somewhat stunted edifice which by much toil and suffering has grown to what it is. The writer, however, is confident that, given the opportunity that Socialism would give to every member of the community, art and science would advance in an irresistible fashion far beyond anything yet known. Men, take them all an all, do not desire to rise superior in their activities to the activities manifested by the men preceding them.

One word more to those who, although themselves members of the working class, have such a poor opinion of the potentialities of their fellows. Why not change your tactics? Why not employ the powers you possess in helping to found a state of affairs wherein the members of the working class—your own class— shall have a chance of showing what they can do? Understand Socialism. Organise for Socialism. Propagate Socialism. Work for Socialism. Do not worry so much about the future. The future, you may be assured, will be quite safe in the hands of an intelligent democracy. We ask for the co-operation of all who accept the principles of Socialism, so that when the inevitable disintegration of Capitalism takes place, we, the workers as a whole, shall be ready, equipped for any emergency, to enter into the new world to be won.
F. J. Webb
Posted by Imposs1904 at 11:08 AM

Fair play to F. J. Webb for writing in terms of "the men and women of the working class". Sadly, a lot of Socialist Standard writers didn't catch on to writing in that inclusive fashion for many - too many - generations. All the more galling when you think it was front and centre in the SPGB's Declaration of Principles, dating from 1904.

On matters relating to literature and the arts, Webb wrote many fine poems for the Socialist Standard. It's worth your while seeking them out. They are here on the blog.

Finally, hat tip to ALB for originally scanning this in.