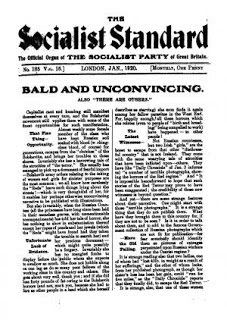 From the January 1920 issue of the Socialist Standard

The issue of an alleged organ of patriotism— the "Daily Sketch"—for the 18th November, 1919, contains an attempt to score off a contemporary, in which the author—"The Man in the Street"—as may be expected, misrepresents the working-class position.

He says: "I want the people who 'create all wealth,' to take special note of the fact that Mr. Churchill's challenge (in the 'Illustrated Sunday Herald' of the 16th November, 1919) was couched in the following terms :


There can be no contrast more striking than that presented by the sober, solid weight and influence of British Trade Unionism and the ruthless, crazy, devastating doctrines with which it has allowed itself to be saddled. These doctrines, and the mood and feeling which support them, can clearly be seen whenever a Labour newspaper is produced. They arise from a thoroughly jaundiced outlook on things in general.
"The British Empire and all that goes to build it up is regarded as a sordid, quasi-criminal, company-promoting affair. The fighting services, in which the average working man takes so much pride, are treated as mere wastrels in themselves, and tools of ambition. The British Constitution, with its ancient traditions and all its wonderful adaptability, which have won for it the admiration, and to a large extent the imitation, of the entire world, is depicted as a base device to favour monopolies and existing vested interests.
"An internationalism of the most extravagant kind; an extreme pacifism that in the war manifested itself as an unaffected defeatism; a wholesale repudiation of national and private obligations ; a frank and spontaneous adoption of the point of view of every country but their own, combined with an extraordinary levity in regard to practical and immediate consequences—these are the characteristics of Labour propaganda."

The foregoing contains more errors to the acre than any statement of similar area on record.

We are just now concerned with the second and third pars, set out above.

Winnie tells us that "the people who create all wealth" say that "the British Empire is regarded as a sordid, quasi-criminal .... affair," etc., etc.

Well, my winsome Winny! And "The Man in the Street"—"What abaht it"? Isn't it true? Is this indictment in any particular inaccurate ?

No. On the contrary, every word of it stands proven from the pages of history, or the teaching of modern science.

For instance, can any one study the history of India—especially the annals of the East India Co.—and the struggles between the English and the French around Pondicherry and else where, purely over questions of commerce, without coming to the conclusion that the British Empire—and for that matter every other form of capitalist government—is a "sordid, quasi-criminal, company-promoting affair".

Seeing that "the fighting services" are used entirely for purposes of destruction, and never produce anything, by what process of logic can they be described as being other than "mere wastrels in themselves, and tools of (capitalist) ambition"?

As for the third par quoted above, "The Man in the Street" goes on: "The B.W.M." (the British Working Man) "can at least count up to five beans; and then asks if Churchill in the hunk of him I have quoted, put down five beans or five bits of bogey ?

"I say that he has put down five beans."

Yes ! my dear "Man in the Street," they are five beans—"true and irrefutable," and because they are "true and irrefutable" you are going to cop it even as the poor wretch of a blackleg copped it —with a spanner; for unlike the miserable Labour newspaper that "lies low and says nuffin," the present writer will smash your argument.

Here is the first "bean."

"An internationalism of the most extravagant kind."

The interests of the workers of every country are, in the main, the same: to sell the only commodity they possess, that is their labour-power, on the best possible terms; and any change in the conditions of labour in one country must necessarily find its reflex in other countries. Therefore the workers must organise internationally for the purpose of ending the exploitation of their class, which exploitation is the object for which the employing class buy labour-power.

The second "bean" is: "An extreme 'pacifism that in the war manifested itself as an unaffected 'defeatism.'"

Inasmuch as Socialists strongly object to taking any part in capitalist wars, it may be correct to describe them as "pacifists," apart from this reservation, that the Socialist Party is AT WAR—in the class war—with the capitalist class of the world.

Then we come to the third "bean" : "a whole sale repudiation of national and private obligation."

Terrible indeed! As regards the first item in this truly marvellous "bean," who was it entered into these aforesaid national obligations? The fact that they are national precludes the workers from taking any part therein, for the working class is a slave class, and while they occupy that status cannot be a part of the nation, and therefore cannot be concerned in the fulfilment or otherwise of agreements arranged between different sections of the exploiting class.

Next, the fourth "bean" : "A frank and spontaneous adoption rf the point of view of every country but their own."

Now, will winsome Winnie or his docile disciple "The Man in the Street," tell us what country the workers can claim as theirs? They do everything necessary for the production of the whole of the wealth of society, but they have not a jot or tittle of ownership in either the raw material, the means of production, or the wealth when it is produced. The ownership of these things is vested entirely in the people who comprise the "nation." The workers are out casts in the land of their birth —whatever part of the world that may be—living a mere Ishmaelitish existence.

The fifth ''bean" is a continuation of the fourth, as follows : ". . . combined with an extraordinary levity in regard to practical and immediate consequences—these are the characteristics of labour propaganda."

Really, this is a serious indictment of the working class! In face of these charges how can we hold up our heads and look our owners in the face?

But hold on! Our gallant (!) critics need not worry. Churchill's diatribe, and his understudy's comments thereon, do not apply to us, but to the Labour Party. And the Labour Party is quite tame and subservient to the interests and dictates of the capitalist class. It is not out to destroy capitalism, but to reform it —


" To rub off the warts and pimples,
To iron out the cracks and dimples."

Did they not allow their spokesmen to support in every possible way the ghastly outrage on mankind during the past five years ?

Did not Brownlie write an infamous letter to the last T U C, demanding increased production? Has not the late Food Controller written in the Press to the same effect ? Does not the Labour Party allow their members to take office in capitalist governments ?

Any organisation which claims to be out for the emancipation of the working class must of necessity, if it is to make good its claim, be hostile—in every sense of the term—to every section of the slave-owning class, "whether avowedly capitalist or alleged labour."

Such an organisation is the SOCIALIST PARTY OF GREAT BRITAIN.