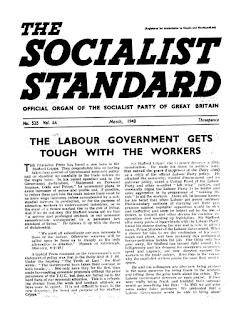 You Have Heard This One Before

Mr. Hector McNeil, Minister of State in the Labour Government, spoke at Brussels about the new European grouping:


“If we are to have a Western Union then this will not only entail immediate sacrifices for both of us but it will also mean important political decisions by both of us.
“It almost looks as if Europe has taken a new decision.
“She not only once more maintains that no dictatorship will be accepted but she announces that she is taking immediate steps now to combine to produce the conditions preventing the emergency and the advance of any dictator or any authoritarian system.
"That is the thought, I believe, behind the Marshall Plan, the Paris Conference, and certainly activating the recent speech by Mr. Bevin.
“The price in cash, in effort, and in sacrifice of all kinds will be worth while if we are able to ensure that no kind of authoritarian rule will arise in Europe, from whatever quarter it originates.”
(Daily Mail, 6/2/48.)

In evidence to the Royal Commission on the Press Mr. Francis Williams, former editor of the Daily Herald, disclosed how conflict arose between Odhams and the T.U.C. about policy. The following is from the Times (13/2/48):


“Minutes of evidence taken on October 15, when Mr. Williams avid Mr. Hannen Swaffer appeared before the commission, were issued yesterday as a White Paper (Cmd. 7318, Stationery Office, Is. 3d.).
‘‘Mr. Williams, whose editorship of the Daily Herald lasted from 1936 until just after the beginning of the war, spoke of difficulties which arose in borderline cases, where it was not easy to differentiate between commercial policy (for which Odhams Press, the majority shareholders, were responsible) and the political policy (which was decided by the trade unions, who were minority shareholders). Conflicts occurred, particularly before the war and at its beginning, when the general editorial policy was to emphasize the seriousness of international developments and the dangers in Germany, and to criticise much of the Chamberlain Government’s policy.
“Often the commercial proprietors felt that such a policy, if vigorously conducted, might drive away some public and advertising support. On a number of occasions leading articles, were, without consultation with the editor, sub-edited by deletion of a fair number of passages by the then chairman of the commercial board of directors. It was the culmination of a clash of that kind which led to his (Mr. Williams’s) resignation.”

The following arc extracts from a Manchester Guardian leader under the heading “Forced Labour” based on “Forced Labour in Soviet Russia” by David J. Dallin and Boris I. Nicolaevsky (published by Hollis & Carter):


“The existence of ‘corrective labour camps’ in Russia is, of course, well known and even officially admitted. As long ago as 1931 Molotov told the Sixth Congress of Soviets of ‘these mass projects employing those deprived of liberty.’ A good deal of information about them may still be gleaned from the Soviet Press. But the vast scale of the system, which may ‘employ’ over ten million people, and the terrible conditions in those camps can be judged only from the stories of those men and women who have experienced them . . . All of them, naturally, are 'prejudiced’; some of them are clearly untrustworthy. Yet the total impression is so convincing that an impartial reader is forced to conclude that if only half is true it still remains a damning account of an inhuman system.”
“The prisoners are paid—but so little that it hardly counts. They are fed—but only enough to keep them working and not always enough for that. If they die, as they do in hundreds and thousands, it is not because the State wishes them to die, but because the conditions in the swamps and forests of Siberia are so fearful that only the strongest can survive.”
(Manchester Guardian, 20/1 /48).


“Major Frank (Bring ’em back alive) Buckley is what the reference books call 'a football manager out of the top drawer.’ And the Major certainly knows a Soccer player when he sees one. When he puts over a deal it is more reminiscent of Big Business in Lombard Street than the simple relaxation of kicking a piece of leather around.
“Major Buckley was the manager who sold £100,000 worth of players when he was at Wolverhampton.
‘‘Now at Hull he announces that nine young players are for sale on the transfer list.
“It is a curious sort of auction in humanity, for the football business, which has a turnover of millions, is not noticeably sentimental or generous to the lads who do most of the hard work and provide all the skill.
“Will these players easily get another job? Are they affected by the Direction of Labour Order? And, if it is policy to train a surplus of players., who looks after the welfare of boys who don’t quite make the grade, or get abruptly put on the transfer list?
"It’s a great game—while it lasts.”
(Cassandra, Daily Mirror, 2/1/48.)

The I.L.P., which once had over 200 of its members in Parliament as Labour M.P.s, has now faded out as a Parliamentary party. The loss of the deposit by the I.L.P. candidate at Camlachie set the seal on it and one proposal to be considered at the Annual Conference is that the Party give up fighting elections and devote itself to propaganda.

It was reported (Manchester Guardian, 26/1/48) that at the Conference of the Scottish division a proposal was on the agenda to alter the name to “The Socialist Party (with which is incorporated the I.L.P.)”. But it would take more than a change of name to turn the I.L.P. into a Socialist Party.

This particular Notes by the Way column was unsigned but it was usually the case that these columns were penned by Edgar Hardcastle (known in the SPGB as Hardy and 'H').

It may have been a simple oversight on the part of the printers that meant that they neglected to attach the usual 'H' at the end of the column, or, alternatively, it may have been the case that because this column wasn't penned by Hardy, the editorial committee decided to leave the column unsigned.