The Socialist Party and economic organisation (1937) 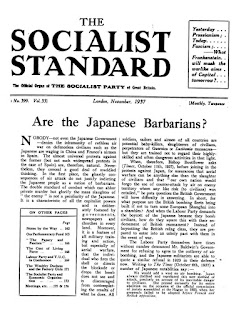 From the November 1937 issue of the Socialist Standard

Upon the formation of the Socialist Party of Great Britain in 1904, its membership immediately took up the matter of – to use a phrase well known on the other side of the Atlantic – “The Burning Question of Trades Unionism.” In point of fact, the whole question of the necessity of economic organisation relative to Socialism was comprehensively discussed at a series of specially-convened meetings of the party. This should indicate that the original members of the Socialist Party were fully alive to the importance of the subject if Socialism was to be considered as a vital force, and brought within the sphere of practicability. Here we return to this subject again to enable workers newly interested in Socialism to understand our position from what we ourselves state, rather than from the misrepresentations of our opponents.

In the first place, it may be necessary to point out that we regard Socialism not as a purely political theory, nor as an economic doctrine, but as one which embraces every phase of social life. Still, every form of human society has its economic basis; either this or it must perish. The production and distribution of the wherewithal to live is a fundamental condition of all social as well as all individual existence.

Hence, the future society of Socialism cannot be an exception to this rule. But the quest for Socialism must proceed upon the well-practised principle of thought and action from the known to the unknown; in other words, we are compelled to act upon the raw material at hand, in the form of human society as it is, and as all past historical and social development has shaped it.

Capitalist society, and all that it entails, gives us the necessary pre-conditions for the formation of Socialism. It has massed together vast populations of property-less wealth producers who unceasingly experience exploitation through enslavement, besides economic insecurity. Not only this, capitalism has raised gigantic means of wealth production whose capacity to sustain human kind can, and will, be enormously expanded once they are freed from capitalist control.

The problem at the outset is how to get rid of the capitalist system. The present writer, like every other Socialist, as an individual, knows that it is utterly impossible to waive it out of existence (he would if he could) and so at present does the whole Socialist Party. It may seem unfortunate to many people, but it is, nevertheless, the fact that the task of removing capitalism and replacing it with Socialist society is one which must be undertaken by the great mass of the workers themselves. The primary work of .the Socialist now is, therefore, propagandist in character.

The power over the means of life which the capitalist class has, is vested in its control of the political machinery. Ownership of the world’s economic resources is certainly an economic factor, but that ownership, if challenged, will find its means of enforcement by and through the State political machine, which, as everybody should know, includes the armed forces, the Army, the Navy and the Air Forces, etc.

Of course, an elaborate legal machinery exists whereby claims on private property are settled among the capitalists themselves, but behind the Judicature and the Legislature stands the means of enforcing the decrees. The political arm of capitalism rules the economic body of the system in the final analysis: which reveals the chief reason why the capitalist class concern themselves so much about political action; they realise that in this field their economic interest finds its ultimate, if not immediate, protection. Thus, the political organisation of the workers for Socialist purposes is thrust upon us as a primary and imperative necessity.

The Socialist Party, in aiming for the control of the State, is a political party in the immediate sense, but we have an economic purpose in view, namely, the conversion of the means of living into the common property of society. Therefore, the question necessarily arises whether an economic organisation acting in conjunction with the political is vital to our task. We have on more than one occasion pronounced ourselves in agreement with the need for such an organisation, and in so doing have flatly denied the charge that the Socialist Party of Great Britain is “nothing but a pure and simple political party of Socialism.” Our standpoint has been that in the present stage of Socialist thought, where the great bulk of the workers are non-Socialist in outlook, the attempt to lay down the form of economic organisation for Socialism is both idle and utopian. The workers’ political organisation must precede the economic, since, apart from the essential need of the conquest of the powers of government, it is on the political field that the widest and most comprehensive propaganda can be deliberately maintained. It is here that the workers can be deliberately and independently organised on the basis of Socialist thought and action. In other words, Socialist organisation can proceed untrammelled by ideas other than those connected with its revolutionary objective. But on the economic field to-day the position presents a somewhat different aspect. Here we already have the trade unions, which are a necessity to the workers under the present system, from the standpoint of their dire need to resist the pressure of exploitation, besides gaining whatever concessions are obtainable in the sale of their labour power. It must be understood that the price of the commodity labour-power, or what is commonly known as wages, together with hours of working and all the many other questions connected with the workers’ employment, are not a matter which is settled by chance or the automatic working out of some indefinable economic law, but is one which is largely to be accounted for by the degree of resistance made by the workers from time to time. Hence, the greater the extent to which they combine on the economic field the more the workers present the capitalist with a situation which the latter cannot afford to ignore. The Socialist Party, therefore, supports and encourages such organisation by the working class, and one of our first public pronouncements on the question read as follows:–

The basis of the action of the trade unions must be a clear recognition of the position of the workers under capitalism, and the class struggle necessarily arising therefrom; in other words, they must adopt the Socialist position if they are going to justify this existence at all. Does this mean that the existing trade unions are to be smashed? That will depend upon the unions themselves. All action of the unions in support of capitalism, or tending to sidetrack the workers from the only path that can lead to their emancipation should be strongly opposed, but, on the other hand, trade unions being a necessity under capitalism any action on their part upon sound lines should be heartily supported.

Where we raise the question whether the trade unions will be broken up in the event of accepting the Socialist position, this can be taken to mean that we do not urge, neither do we anticipate, that the struggle on the economic field would be surrendered, rather would it be intensified and more intelligently conducted because of the Socialist basis of the unions. As the trade union movement stands to-day it is still craft and sectarian in outlook, still mainly pro-capitalist, even where the workers are organised on the basis of industry. Our own experience of some of these latter unions is that they are little more than a confederation of craft unions, each section regarding its own immediate interests as the more important; real working-class interest and understanding is conspicuous by its absence. In fact, whilst we are writing this there comes to hand a letter from an American reader in which our attention is drawn to a similar state of things in U.S.A. We are told that in the United Mineworkers of America , “‘the diggers’ interest is primary and other groups, such as fan men, boiler men, hoist men, etc., being very much in the minority often get, when the scale (wages) is drawn up, less than the rates paid in other industries for like work.” Whilst we have no means of checking the statement of our correspondent, we can well understand such a situation existing. Apart from other influences the failure to understand the class position plays a big part in the many anomalies which arise among the organised workers, hence the need for Socialist propaganda among them is of paramount importance. But they have yet to learn the real nature of capitalism besides understanding the process by which the common interest of humanity can be effected through Socialism. The social ownership of the means of life must be understood to mean exactly what it implies, namely, that the interest of society as a whole is of primary importance.

It is for this reason, apart from others that we need not now dwell upon, that we have opposed those industrial unionists of the De Leon school. These people have insisted that organisation by industry should be the basis of the economic organisation for the establishment of Socialism, or, to use their own phrase, “industrial unionism is the embryo, the undeveloped form of future society.” We have insisted that such a form of organisation would divide the workers on the basis of the industries in which they were engaged, with the inevitable consequence that the industrial interest must triumph over the social interest which Socialism so fundamentally demands.

The economic organisation based on Socialist principles can only arise after the workers have been made Socialists in far greater numbers than at present. The struggle on the economic held under capitalism has to be, and is, carried on by Socialists and non-Socialists alike. The small number of workers who really understand the meaning of Socialism is such that any attempt to form a separate Socialist economic organisation at present would be practically futile, for the very nature of the workers’ economic struggle under capitalism would compel such an organisation to associate in a common cause with the non-Socialist unions during strikes, lock-outs and all the other activities on the economic side of the class struggle.

The Socialist Party, therefore, whilst holding that the working class must be organised, both politically and economically, for the establishment of Socialism, urges that the existing unions provide the medium through which the workers should continue their efforts to obtain the best conditions they can get from the master class in the sale of their labour-power. That the trade unions must inevitably accept the Socialist theory as the logical outcome of their own existence, and as such will provide the basis of the economic organisation of the working class to manipulate the means and instruments of wealth production and distribution when the capitalist ruling class have first been dislodged from political power. The essential conditions for obtaining Socialism must never be underestimated. At the very moment that the workers have gained control of the State machine provision must be made simultaneously for the economic requirements of the community. The Socialist working class of the future will, no doubt, see to this as one of its supreme functions.

We intend later to deal with other aspects of this question.
Robert Reynolds
Posted by Imposs1904 at 9:13 PM

"We intend later to deal with other aspects of this question."

I'll have a look. Bear with me.

"We intend later to deal with other aspects of this question."

Just scrolled through 12 or 13 issues following this particular issue of the Socialist Standard, and no articles matching the above description leap out at me. If anyone else with access to Standards from this period know of a article that I might have overlooked, let me know.

Cheers, and sorry to have distracted you.