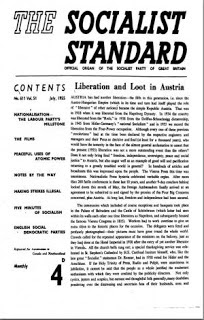 From the July 1955 issue of the Socialist Standard

It is becoming more typical of the stultified mental attitude of “schools higher learning” that they refuse to allow the most innocuous controversial subjects to be discussed and debated. In the growing atmosphere of fear and thought control which is prevalent today, the prohibition of academic debates between Annapolis, West Point and other collegians on the subject of the recognition of China caused even a most conservative President of the United States to state in his weekly press conference that he himself would have allowed such debates. Though the subject of the debate is of prime importance to the ruling classes and is considered quite a knotty problem by them, what are some of the fundamental issues involved in the whole China question, and who has the answers?

What will it be—Recognition of China or War, hot or cold? Will it be “peaceful coexistence ” or the culmination of modern science, mass slaughter by fusion. The problem of relationships of the United States with China as part of the world wide competition of nationalist states, is one aspect of the never ending struggles of capitalist powers. Drastic and swift as the changes in tactics may be, the current policy of U.S. Capitalism is that there will be no major war for a while, and that the economic competition will determine supremacy.

In line with the emphasis on economic development the Foreign Operations Administration is presenting estimates to the Bureau of the Budget. Military programmes will be cut down in Europe and economic programmes in Asia will be expanded. Economic aid to the countries surrounding China will be greater in 1955 than the $1,200,000,000 expended in 1954. Note well that it is the Government which is planning all this. State planners all, on either side!

Rapid Growth
China, it is feared, is developing faster economically than the “free countries” of Asia. Although there are no exact statistics on Chinese capital investment, ex-Premier Shigeru Yoshida of Japan estimated that the rate of capital investment in China was twice that of other Asian countries. The United States which poured billions of dollars into Nationalist China only to have it washed down the drain, still is trying to create, develop and control the market in Asia. With its tremendous economic strength the United States is attempting to contain the embryonic development of state capitalism in China. As a measure of the strength of the rivals, the gross national product, the total value of all production, in 1954 is expected to be between $350,000,000,000 and $360,000,000,000 for the United States, $200,000,000,000 for Western Europe, $160,000,000,000 for Russia and all her allies, and about $73,000,000,000 for the other Asian countries. China’s industrial development is, of course, now just beginning to accelerate.

What is transpiring in China is not Socialism, no more Socialism than there is in the U.S.S.R. Ruthless as were and are the methods of Russian State Capitalism, the child bids fair to outdo the parent. In the purges carried out since 1949 the total number executed is estimated at well over 10,000,000. Communist bureaucrats have replaced the larger land owners and the urban merchants who were mercilessly executed. Peiping, even after the purges, still officially claims a population of 582,000,000 in all of China. About 80 per cent. are peasants cultivating two acres of land or less. Josue de Castro in his “Geography of Hunger” well documents the chronic famines which periodically starved to death millions of Chinese, and the constant hunger which over two thirds of the population suffer. Land reform was eagerly received by millions of peasants even though they only received an acre or two at the expense of the wealthier landlords, who themselves might have had only five to 20 acres at the most. However, when Peiping undertakes to collectivize 100,000,000 peasant families within the next decade force indeed will be the midwife of collectivization, and the costs will be even higher than in Russia where millions died in the collectivization attempt.

Anti-Working Class
Communist apologists seem to glory in the death of millions as some sort of historical necessity. They, like the Nationalists who preceded them in power, take pride in their toughness and ruthlessness. A Socialist may ask whether this is the means by which will be made “the ascent of man from the kingdom of necessity to the kingdom of freedom.” Socialists think not. Socialists think that promoting the understanding of the meaning of Socialism in the majority of working class heads is of more importance in achieving Socialism than the bludgeoning of working class beads to achieve economic progress in backward countries.

The rapid industrialization of China will require large amounts of capital. Some of this capital will come from Russia. Certain countries of the West would also like to find a market in China for their capital goods. Whether under the direction of the entrepreneur, corporation or state, "capital is value that breeds surplus value.” Of all the commodities involved the commodity labour-power is the only one which "creates during its consumption a greater value than it itself possesses.” The Chinese State unhindered by any organized opposition of the workers will attempt to secure this labour-power at a price lower than its value, low as its value is by Western standards. Even then, as elsewhere, the efficiency of the worker must be increased and he requires more of the means of life to replace the energy expended. The value of the labour power of the Chinese worker is determined like that of an American worker. It is determined by the labour-time socially necessary for its production and its reproduction. However, as Marx wrote, “in contrast to other commodities a historical and moral element enters into the determination of the value of labour power.” Therefore, if there will be increases eventually in the standard of living under State Capitalism, they will be increases which are consonant both with the development and needs of capitalism, and also the results of the struggle to sell labour-power as a commodity to the state at its increased value.

The realization that its mode of production is far inferior to that of the West impels the Chinese State to tremendous effort in the economic sphere. It is part of the dialectic of world development that some day will bring Socialism. Socialism is far from being established in China. Though the pessimist may echo the same sentiment about the advanced capitalist countries of the West, they are at least one step nearer. China is merely following the industrialization pattern of countries like Japan and Russia.

While someday the Chinese will produce automobiles instead of rickshaws, will produce all the various consumer 1 and capital goods that the industrialized West produces, and the commissars of the “People’s Democracy” will delude them with the propaganda that they have advanced into Socialism, the status of the Chinese workers will still be that of workers of the world over—wage slaves for a master class. Until this relationship is done away with there will be no Socialism.

Congratulations. I hope to see another 11,000