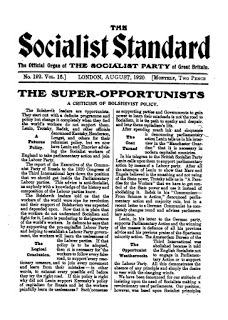 From the August 1920 issue of the Socialist Standard

A Fatuous Policy
The Bolshevik leaders are opportunists. They start out with a definite programme and policy but change it completely when they find the world’s workers do not support them. Lenin, Trotsky, Radek, and the other officials denounced Kautsky, Henderson, Longuet, and others for their reformist policy, but we now have Lenin and Zinoviev advising the Socialist workers of England to take parliamentary action and join the Labour Party.

The report of the Executive of the Communist Party of Russia to the 1920 congress of the Third International lays down the position that we should get inside the Parliamentary Labour parties. This advice is anti-Socialist, as anybody with a knowledge of the history and composition of the Labour parties know.

The Bolshevik leaders told us that the workers of the world were ripe for revolution and their support of Bolshevism was expected and depended upon. Now that it is plain that workers do not understand socialism and fight for it, Lenin is pandering to the ignorance of the world’s workers. In defence he says that by supporting the pro-capitalist Labour Party and helping to establish a Labour Party government, the workers will learn the uselessness of the Labour parties.

The Logical Conclusion
If that policy is to be adopted, then it is necessary for the workers to follow every false road, to support every reactionary measure, and to join every movement and learn from their mistakes—in other words, exhaust every possible evil before they try the right road. If this policy is right why did not Lenin support Kerensky’s policy of capitalism for Russia and let the workers painfully learn its uselessness? Such nonsense as supporting parties and Governments to gain power to learn their misdeeds is not the road to Socialism, it is the path to apathy and despair, and lengthens capitalism’s life.

The Coat Turned
After spending much ink and eloquence in denouncing parliamentary action Lenin tells us in his interview in the Manchester Guardian that it is necessary in modern capitalist countries.

In his telegram to the British Socialist Party Lenin calls upon them to support parliamentary action by means of a Labour party. After all the attempts of Lenin to show that Marx and Engels believed in smashing the State power, Trotsky tells us in A Paradise for the Workers that we have to get control of the State power and use it instead of abolishing it. Radek, in his Communism—From Science to Action, denounced parliamentary action and majority rule, but in a recent letter to a German Communist he completely changes round and advises parliamentary action.

The Opportunist Weathercocks
Lenin, in his letter to the German party, supports Parliamentary Action and the winning of the masses in defiance of all his previous advice and previous praise of the Spartacan minority action. The Amsterdam Bureau of the Third International was abolished because it told the English Socialists not to engage in Parliamentary Action or to support the Labour Party. All this demonstrates the absence of any principle and simply to veer with the changing winds.

We have been denounced for our attitude of insisting upon the need of Socialists making a revolutionary use of parliaments. Our position, however, was based upon Socialist principles and a recognition of the facts of history, not a desire to pander to popular prejudices such as support of a dangerous and fraudulent Labour party.

We have opposed Kautsky’s reformism and opportunism because it is not Socialism and is against the principle of the Class Struggle. We are equally opposed to dangerous teachings if they come from Lenin, Radek, or any other man who sets himself up as a teacher of socialism. Our position is that taken up by Marx and Engels and made plain by them in their writings. Engels says in his last (1890) preface to the Communist Manifesto that we must gain the minds of the masses. Bolshevism, however, has depended for its triumph upon the minority, who ignored the majority of workers. So true is this that Radek in his pamphlet ridicules anything else in minority action for Socialism.

Bertrand Russell, who accompanied the Labour delegation to Russia in June, records his interview with Lenin in the Nation (July 10th and 17th), and Lenin there admits the opposition of the peasantry. Lenin in reply to Kautsky (The Dictatorship and the Betrayer Kautsky) does not attempt to deny Kautsky’s charge that the Menshevik and Social-Revolutionary delegates to the Soviets were suppressed in order to maintain Bolshevik majorities. Russell states the Soviets are moribund and that any other delegates than Bolshevik ones are denied railway passes and so cannot attend the Soviet meetings. He also says that the All Russian Soviet meets seldom, that the recall is exercised for minor offences, such as drunkenness, and that the delegates continually ignore their constituents. We do not accept Russell as an authority, but much of his report agrees with Bolshevik writings.

We have always contended that the Bolsheviks could only maintain power by resorting to capitalist devices. History has shown us to be correct. The January 1920 Congress of the Executive Communists in Russia abolished the power of workers control in factories and installed officials instructed by Moscow and given controlling influence. Their resolutions printed in most of the Labour papers and the Manchester Guardian here show how economic backwardness has produced industrial conscription with heavy penalties for unpunctuality, etc. The abolition of democracy in the army was decreed long ago, but now that the army is being converted into a labour army it means rule from the top with an iron hand.

Russia has agreed to repay foreign property-owners their losses and allied Governments their “debts.” This means continued exploitation of Russian workers to pay foreign exploiters.

With all the enthusiasm of the Communists they find themselves faced with the actual conditions in Russia and the ignorance of the greater part of its population.

There is no easier road to Socialism than the education of the workers in Socialism and their organisation to establish it by democratic methods. Russia has to learn that.