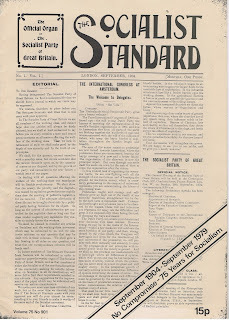 From the September 1979 issue of the Socialist Standard


It may not seem much of an achievement to commercial publishers but we take pride in the fact that the Socialist Standard has been published without a break for seventy-five years. Writing and editing of the articles and preparing for the printer—as well as the distribution—have been done by members in their spare time and often under great difficulty.


Frequently it happened (and no doubt can happen still) that when the deadline was reached for sending material to the printer there were not enough articles or—which is just as much a problem—there was not a proper mix. The editors then had to fill up the space with hurriedly written material of their own. Gilbert McClatchie, who was directly involved with this during the First World War, wrote about the difficulties in the Socialist Standard (September 1954). As he put it, "Filling the columns of the SS became a major problem. Most of the regular writers were too busy keeping out of the services to do much". To make things worse writers who had promised articles were unable to deliver them, or sent them too late, and on at least one occasion a long article being published serially was never completed.

In some respects conditions have become more difficult. In the 1930s it was possible to have the 21st of each month as the latest date for receipt of articles—now it is much earlier. Printers then worked Saturdays and letters posted quite late in the London area were certain to be delivered next morning.

The Party was fortunate in the early years in having our journal printed by a Party member, A. E. Jacomb, who set the type himself. And for many years after that we had as printers R. E. Taylor, who had Party members in their employ and a manager who took a sympathetic interest. Untyped articles were also acceptable; nowadays printers are justifiably more demanding. Jacomb used to advertise his business in the Standard in terms strikingly unlike the extravagances of modern advertising. His notice informed possible customers that "Jacomb Bros. can do printing as cheaply and as well as anyone else".

Writers sometimes presented problems by sending in articles written on odd scraps of paper of different sizes, or written on both sides. One writer regularly sent his articles on the sticky, very thick blue paper used for packets of sugar. One or two writers made life difficult by insisting that their articles must be published exactly as written, with not a word altered; which could mean missing publication in the intended issue while they were asked for their agreement to alterations.

Different writers have a very different approach to their task. At one extreme was O. C. Iles, who had a facility for producing smooth generalisations of our case. On more than one occasion, hearing that we were short of material, he would sit at the Executive Committee and, while participating in the business, dash off his articles. At the other extreme was Wilmott, who would go to great trouble in tackling complex theoretical issues backed with quotations. He was a perfectionist and had an exaggerated fear that he might have covered some point inadequately. It was normal for him to submit an article and ask for it back after a few days. One of his articles he recalled three times before he was satisfied.

Bold Reputation
When I came on the Editorial Committee I was instructed by Fitzgerald, McClatchie and Moses Baritz about the need to maintain the Standard's high reputation in presenting our case and willingness to meet criticisms from opponents ("we shall give a fair hearing to all sides on any question", as it was put in the first issue). They also warned against accepting any alleged quotation without checking it. Baritz mentioned, with justification, that more often than not quotations, either through carelessness or intent, were inaccurate. Once we were puzzled to receive an article written jointly by two new writers which contained a "quotation" which we unable to find in the book referred to; only to be told that they had summarised several pages and re-written their own version as a "quotation". They were, they said, confident that that is what the writer meant to say.

The Party's reputation, even among opponents, had an interesting confirmation late in the 1930s when we debated with a fascist organisation. A Party member wrote a report and we informed the organisation that we were publishing it and would let them check it in advance. We received a reply that if we were the Communist Party they would want to see it but as we were the SPGB they did not need to do so.

Moses Baritz was firmly convinced that too little credit had been given to Engels in his partnership with Marx and that some material published over Marx's name had been written by Engels. Baritz was triumphant when he was able to show in the Standard that this was true of Revolution and Counter-Revolution.

Letters of criticism from readers sometimes led to trouble when the writers paid no regard to limited space. We once received a "letter" from sailors on a Russian ship which had docked here, which ran to 14,000 words. When we pointed out that it would occupy the whole issue and asked for it to be cut to a reasonable length, we were told that our undertaking to reply to criticism demanded that we should publish the whole letter as a special issue.

The Socialist Standard, like any other publication, has to be concerned about libellous statements and writers have not always appreciated this. One writer indignantly protested against the alteration of a statement he wanted to make, on the naive ground that he was sure that what he said was true—which signally fails to take account of the intricacies of the libel laws. The Party did not have one libel action, reported in the issue for August 1907. We were alleged to have libelled officials of the Amalgamated Society of Railway Servants. Two of our members, Anderson and Fitzgerald, conducted our defence and lost the case; but as the jury awarded damages of only £2 they cannot have been much impressed by the railway union's arguments.

In wartime, censorship and Defence of the Realm regulations presented new problems as printers naturally did not want trouble with the authorities. On one occasion (February 1916) the printer flatly refused to publish an article "Lloyd George and the Clyde Workers" and the column was left blank, with an explanation of what had happened.

Readers of the early issues will notice the optimism of the writers about the speedy winning over of the working class. The first issue expected soon being able to go over to weekly publication. It has proved to be a much more difficult task than was then believed.
Edgar Hardcastle