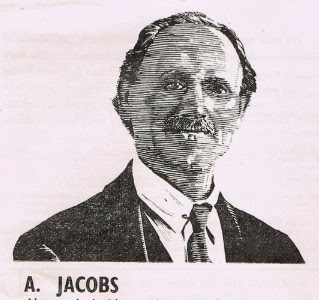 Very early in his working life Jacobs became interested in the struggles of the working class. As a young man he lived in Edmonton, then a rising suburb of North London.

By occupation a cigar maker, he had to make the journey daily to Battersea, in South London, having to rise early every morning to reach the workshop.

With ever-increasing numbers of workers on the platform, and few trains to take them, the workers were aroused into agitating for increased trains and workmen's facilities for cheap fares. Meetings were held, and into these Comrade Jacobs flung himself with zeal. One morning he was arrested on Liverpool Street Station and charged with disturbing the peace. His trial took place at the Guildhall, and he was defended by Mr. Thompson, at that time Editor of Reynolds News, and acquitted.

He was an active member of the Cigar Makers Union and served on their executive committee. Then he became interested in the propaganda of the old Social Democratic Federation and eventually joined them. At about this period of his life he experienced considerable unemployment and, with a young family, suffered chronic privation and want.

Very shortly after the formation of the S.P.G.B. he decided to join the Party following his resignation from the S.D.F.

For many years he was an enthusiastic worker and spoke at four, five and six meetings a week, very frequently addressing two meetings on Sundays. Following the outbreak of the war in 1914 he never hesitated to hold meetings in Victoria Park, East London, notwithstanding hostile demonstrations  at every meeting he addressed.

When "peace" was declared he threw himself with redoubled energy once more into the struggle for Socialism, and only gave up owing to advancing age and decline in his health.

He became almost an institution on the meeting pace in Victoria Park, for he seldom missed a meeting on Sundays during many years.

The Party has produced many great workers in its cause, but few gave more ungrudgingly than our old comrade.

Email ThisBlogThis!Share to TwitterShare to FacebookShare to Pinterest
Labels: A. Jacobs, History of the SPGB, Outdoor Speaking, R1954, September 1954