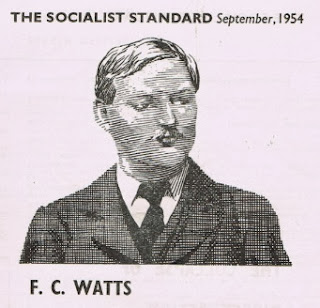 
F. C. Watts was an active member of the group that came out of the Social Democratic Federation to take part in the founding of our Party.


He was an excellent writer and contributed many articles on theoretical subjects to the Socialist Standard as well as putting our position in written debates with opponents. He was also a good speaker; he spoke quietly and forcefully without indulging in rhetoric, and his lectures were packed with useful information and logical argument. He was particularly good when speaking on theoretical subjects.

For many years Watts conducted well attended classes on Economics at our various Head Offices; many writers and speakers, in the years before 1914, were greatly indebted to him for advice and for the information he so willingly imparted.

In the early years of the Party Watts undertook the work of keeping in touch with those abroad who were in sympathy with our outlook, and he contributed articles to the journal of the old Socialist Party of Canada The Western Socialist. He also translated a number of articles from foreign journals that had been written by prominent radical writers, such as Guesde.

Watts was a carver by trade, and a first class craftsman; some of the internal decorations of the ill-fated Titanic were his work, and he also did some of the carving on the coronation chair of George V.

Like Fitzgerald he was fond of cycling and till late in life he could be met on some of the interesting byways of England and in some of the quaint old inns.

Watts was active from the early days of the Party until late in the twenties; then he seems to have quietly faded out and we have not heard of him for many years.

It may interest those who have read our pamphlet "Socialism and Religion," to know that it was drafted by Watts. It was one of the most popular pamphlets, both here and in America, that the Party produced and a certain Bishop Brown quoted from it, and paid it a tribute, in his pamphlet "Christianism and Communism."
Gilmac.
Posted by Imposs1904 at 10:15 PM