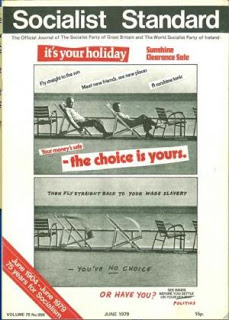 From the June 1979 issue of the Socialist Standard

Tactics and strategy remain two of the most overused words in the vocabulary of the left wing, making anything excusable, everything permissible. But despite their seemingly magical qualities, they are essentially simple words: tactics means skillful manoeuvring in the face of the enemy; strategy, the art of deciding which tactic is the correct one for the task in hand.

Left wing use of these words does not relate to warfare but to a specific kind of combat — class struggle. Tactics and strategy are the means by which the immediate, or day-to-day, struggles of the working class (over wages, housing, employment and so on) can be transformed into a revolutionary struggle to overthrow capitalism.

The words also carry with them the direct implication of the existence of leaders and led. The generalship, or strategy, is conducted by the leaders, or to use the jargon, the vanguard. This vanguard decides which tactics are to be used and, hopefully, responded to by the working class. In left wing ideology workers, independently, can only develop a trade union consciousness.

The claim to be a vanguard, or a member of it, of necessity involves the ability to decide on the right tactics and overall strategy. For what is the use in having a vanguard if it does not possess superior political judgement to that of the broad mass of the people? It follows, then, that the vanguard can only be justified on the grounds that it can, and does, devise the correct tactics for socialist advance.

But the attachment to this Leninist-inspired doctrine produces contradictions apparent from the outset. In times of economic crisis the left knowingly formulate a series of tactical demands which capitalism will not, or cannot, meet. For example, five days work or five days pay ; they mobilise as many workers as they can round these utopian objectives. By striking for unrealistic demands workers will, it is hoped, learn the folly of purely industrial action. In the political arena the same absurd policy prevails: workers are called upon to vote for a Labour government which the left knows will betray their aspirations.

Two Examples
But in practice this policy of making extravagant demands has proved unworkable; objectives have had to be realisable in order to gain working class support, expectations, once aroused, had to be satisfied. These failures in elementary theoretical considerations were more than matched by similar lapses in political practice. Of the numerous examples which might be cited (the role of the Labour Party, Grunwick, Chile, Vietnam) let us confine our attention to two examples, the Campaign for Nuclear Disarmament (CND) and the current Right to Work Campaign.

In the 1950s Cold War politics had made the threat of a nuclear holocaust a distinct possibility. Many people became, not unreasonably, concerned and afraid. Out of this widespread fear emerged CND, the pre-eminent left wing organisation of the time. Under its umbrella, mass protests took place in Britain. The object of the exercise was to seek support in a non-sectarian manner from all well-intentioned people (in much the same way as the Anti-Nazi League does today) to rid the world of the nuclear menace. Its other purpose, although normally unstated, was to recharge the flagging fortunes of the left in Britain.

For a time CND was spectacularly successful; the Aldermaston march almost became a British institution; its slogan. Ban the Bomb, became a shibboleth known to each one of us; maximum publicity was gained through sit-down protests and recruitment of some major public figures, such as Bertrand Russell. In fact, so powerful did the movement become that it nearly split the Labour Party over whether Britain should go it alone and renounce the use of nuclear warfare.

The influence, however, was short-lived. Membership declined as nuclear stockpiles grew. Many countries who, at the formation of CND, did not possess the technology to produce nuclear weapons, gradually were able to do so; for example, Brazil, China, India, South Africa. In terms of destructive power, since ‘Little Boy’ fell on Hiroshima, present stockpiles are sufficient to annihilate the total world population 690 times over All the work was for nothing.

Failure
The failure of CND was not just its inability to realise that capitalism whether operated by Labour or Tory, was stubbornly resistant to change in this crucial area of arms production; the fault went much deeper than that.

The fifties were the era when we ‘never had it so good’, or at least so we were told. The working class were seduced, according to the story, by easy living, fat wage packets and the consumer society. But the answer lay more in the failings of the vanguard than in the satiated workers. CND was broad-based containing liberals, Christians, pacifists, trotskyists and others from beatniks to pop stars. Like all popular fronts it was held together by one aim — banning the bomb. Once this was seen to be unrealistic, the movement collapsed.

However, no such explanation could be given for the failure of the Right to Work Campaign to make an impact in the current conditions of economic crisis. Unemployment at present is hovering around the one-and-a-half million mark, according to government sources. The Right to Work Campaign's lack of success is just one more example of miscalculation by the vanguard (of the Socialist Workers Party).

As for the origins of the movement, the SWP can claim no credit. The campaign is modelled on a similar movement of the 1920s and 30s organised by the Communist Party, the National Unemployed Workers’ Movement. The claim for the right to employment at a time of crisis in the economy and in the teeth of capitalist opposition would, it was hoped, demonstrate to the workers that capitalism was incapable of guaranteeing men and women a decent standard of life. Realising this, the workers would seek an alternative political solution to capitalism, socialism. The NUWM was extremely successful in mobilising hundreds of thousands of workers against unemployment.

However, the conditions were more fortuitous than now. In those days unemployment benefit was low and certain groups of workers were excluded altogether; there was also a rigid system of means tests, no health service and. finally, the memory of the broken promises of the 1914-18 war was still fresh in people’s minds. The NUWM was therefore an organ of hope to a dispirited and embittered section of the working class. But although the unemployed marched the streets, lobbied MPs, wrote indignant letters to the newspapers and attended countless meetings, nothing was achieved. Few of them found work and of those that did, most soon forgot about the need to change society.

Lofty Pedestal
The lesson was clear; hungry people could be mobilised to alleviate their hunger, but to change society socialist understanding is needed. But, learning nothing from history, the sins of the fathers were visited upon their sons. The SWP, operating in the changed conditions of welfare capitalism where the harsher edge of poverty had been offset to an extent through social security benefits, redundancy payments and the health service, attempted to enact the same policies at the CP. Like its predecessor, it failed disastrously. But whilst the NUWM could claim to have enlisted the support of thousands, the SWP has achieved nothing of significance outside of a few token marches and lobbying of the Labour Party Conference and the TUC.

From these brief histories of the CND and the Right to Work Campaign it is apparent that the vanguard's claim to tactical superiority over the workers is spurious. They have demonstrably failed on the most simple matters of judgement and analysis. These simple errors are compounded by faulty theory, which involves uncritical acceptance of Leninist theory.

Moreover, it is futile for the vanguard to endlessly find scapegoats for faulty theoretical formulations in the skullduggery of politicians, the wrong leaders, or the ruthlessness of the capitalist class. Time, then, that the vanguard came down from its lofty pedestal and admitted that workers can aspire to something more than a trade union consciousness, that it does not hold the holy writ in its hands, and came to terms with the real problem of building a mass socialist consciousness.
Bill Knox
Posted by Imposs1904 at 3:39 PM