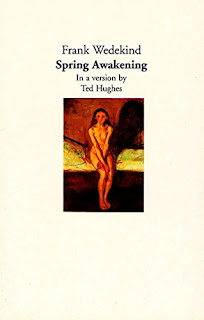 Theatre Review from the November 1995 issue of the Socialist Standard

Watching Spring Awakening and listening to the comments of people sitting near me, I was struck once again by the way in which audiences in the late twentieth century can recognise the absurd beliefs which previous generations held dear whilst being unaware of the ideological prejudices which colour their own views of the world.

Spring Awakening is described by its author, the German dramatist Frank Wedekind, as "a children’s tragedy". The play is about adolescence and the repression of sexual feelings. But it is also about power. Wedekind, who lived at the turn of the century, was much concerned with such matters. His most famous play, Lulu, follows the story of a latter-day courtesan whose liaisons with powerful members of the bourgeoisie end tragically when she is murdered, nominally by Jack the Ripper.

In Spring Awakening Wedekind captures the steamy uncertainties of a group of young people whose natural curiosity about their emerging sexuality is powerfully repressed by the worst excesses of Lutheranism. The school which they attend requires the translation of arguably obtuse Greek and Latin texts and the memorisation of antique verse, but it fails to acknowledge their human physiology. A mother continues to tell her daughter, an emerging woman, that the stork delivers children, the results are dramatically predictable: The daughter dies in childbirth; a young man commits suicide.

Given the ideological beliefs which held sway in the early years of the century it is hardly surprising that contemporary performances of the play were surrounded by controversy. It was banned in Prussia in 1908, and a single performance on Broadway in 1917 was almost prevented by the New York City Commissioner. The play was first performed in Britain as recently as 1963, and only then after the Lord Chamberlain had insisted that:

The play is astonishingly well performed by a splendid cast, many of whom are still at school or at drama school. It makes for an enlightening if sad evening, but one from which the audience seemed to take comfort. As someone remarked near me. “Thank goodness our kids don't suffer these hangs-ups."

True, but the opinions I heard seemed far too smugly sanguine. Most people may have removed one set of scales from the eyes, but they are still victims of myopia, and they have countless other blind spots. Whilst sexual repression is no longer over, children are still victims of arrangements in schools which both repress and suppress. What they learn and how they learn is controlled by others without any reference to their real needs. They are directed and manipulated and, like objects in an industrial process, commonly referred to as "the products of the education system". Their humanity must take second place to the needs of capitalism.

Socialism is characterised by economic emancipation, with people determining—in full consciousness of the consequences of their choice—their own needs, and freely satisfying these. In like manner a socialist society will be concerned with educational emancipation or, to paraphrase Sheila Grundy, "with people finding their own voice”.

Socialists watching this fine production of Spring Awakening will probably delight in the experience and in the evidence of prejudices abandoned. But unlike other members of the audience they will recognise that the battle to emancipate the population from ideological conditioning and false consciousness has barely begun.