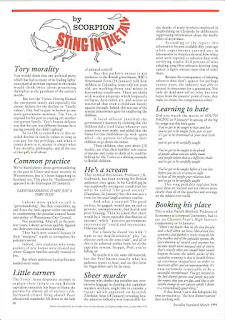 Tory morality
You would think that any political party which has had so many of its leading lights’ extra-marital activities exposed in the media would think twice about presenting themselves as the guardians of the nation’s morals.

But not the Tories. Having blamed the one-parent family and especially the absent fathers for the decline in "family values", they had to gaze in horror as one more government minister, Tim Yeo, is exposed for his part in creating yet another one-parent family. Yeo’s brazen defence was that his case was different because he is paying towards the child’s upkeep!

So its OK to contribute to this so- called decline in family values so long as you pay for the privilege, and when it comes down to it, money is always what Tory morality, philosophy, and all the rest of that guff, is all about.

Common practice
We’ve heard plenty about gerrymandering in the past in Ulster and more recently in Westminster, but it’s been happening in Scotland too. This piece by "Backbencher" appeared in the Glaswegian (27 January):

Labour were quick to call it "gerrymandering". But their councillors, up and down the land, appear rather restrained in condemning the peculiar council house sales policy of Westminster City Council.

Not surprising. After all, in the post-war years, Labour activists quickly figured out their own vote-creation formula.

They built new council houses in their 'marginal" wards to strengthen the political control.

Indeed, this explains why some pockets of new homes were created not where Glasgow families actually wanted to live.

Little earners
The Tories’ latest desperate attempt to explain their failure to run British capitalism smoothly has been to blame the parents for almost all of society’s ills. Increased crime? Drug abuse? Poor educational standards? All down to the lack of parental control!

But this pathetic excuse is not exclusive to the British government. BBC’s Newsround Extra (14 January) told how children in Colombia, some only ten years old, are working down coal mines in horrendous conditions. There are shafts with wooden pit-props which frequently collapse, dust-laden air, and access so restricted that even a child can barely squeeze through. Indeed, this was one of the reasons mine-owners gave for employing the children.

A local official justified the government's inaction by claiming that the children did a Lord Lucan whenever rare inspections were made, and added that the blame for this child-labour lay with — guess who? — the parents for allowing their children to go down the mines.

These children, they earn about £10 weekly, are often their families’ sole source of income and, come to think of it, could be held up by the Tories as a shining example to British children.

He’s a scream
That comical Keynesian, Professor J.K. Galbraith, has been wowing his British audiences once again. In his Cardiff gig he was supposedly setting-out conditions for what he called "the good society" (Guardian, 26 January) but this was just a front for his usual laugh-a-minute routine.

And what a routine! The good society, he gagged, would put an end to poverty, unemployment, bad health and poor housing. Then he joked that there would be a "more equitable distribution of income" while "positive government intervention" could end recessions. Hilarious stuff!

For a finale he slayed ’em with "I want to see demilitarisation" plus "an effective curb on the arms trade", and all of this to be achieved within (wait for it) the capitalist system. Stoppit, Prof, you’re killing us!

So maybe it is the same old material, but the Prof knows exactly what his audience wants to hear, and on this form his Vegas debut can’t be far away.

Sheer murder
Anyone who thinks that socialists use over-emotive language in claiming that capitalism murders workers, might like to consider a report which appeared on Scottish Television News (18 January) revealing how the asbestos industry was responsible for the deaths of many workers employed in shipbuilding on Clydeside by deliberately suppressing information about the deadly effect of its product.

According to the report this information became available fifty years ago when experiments carried out in laboratories in America showed how white mice were exposed to asbestos dust with terrifying results. 81.8 percent of mice inhaling long-fibre asbestos develop lung cancer, a figure sixteen times that of other dusts.

Because the consequences of inhaling asbestos dust don’t appear for perhaps twenty years, the industry was able to protest its innocence for a generation. Not only do dead men tell no tales, but even better from the insurers’ point of view, they make no claims for compensation either.

Learning to hate
Did you watch the movie of South Pacific on 9 January? In among all the big hit songs was this little gem:

This song probably explains how racist ideas are learned and not inborn more clearly than all of the speeches and writings on the subject ever could.

Booking his place
This is what Patrick Minford, Professor of Economics at Liverpool University, had to say on Channel Four’s High Interest: Loadsamoney on 16 January:

"There’s no doubt that in the last decade and a half when we have liberalised this economy and pushed it more towards the free market end of the capitalist system, the distribution of wealth and income has become much more unequal and of course that’s exactly what one "would hope would happen because the whole point of the capitalist economy is that it should throw up enormous inequalities in order to motivate effort and entrepreneurship. It’s now extremely respectable to he a successful entrepreneur. You get invited to the best dinner parties and people pay you the respect that you are due, and that is the visible change in our culture which I think is a tremendously good thing."

If that doesn’t earn this lickspittle his own invitation to "the best dinner parties" then nothing will.
Posted by Imposs1904 at 10:12 AM

I've probably mentioned this a gazillion times before on the blog but there so many Glasgow/West of Scotland centred pieces in the Sting in the Tail columns because it was the Glasgow Branch of the SPGB who would put it together each month.

PS - that's the March 1994 issue of the Socialist Standard now done and dusted on the blog.